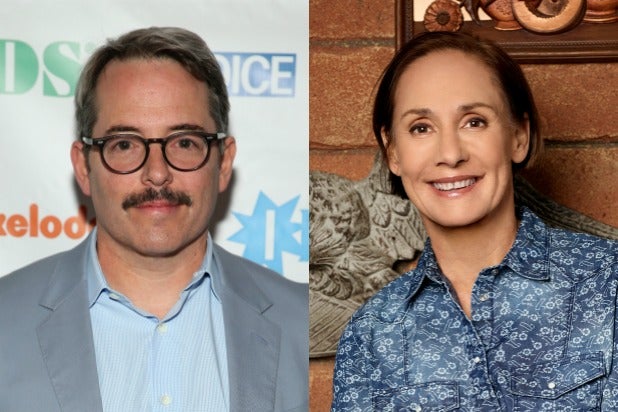 Aunt Jackie is in the mood for romance!

Matthew Broderick has been cast as Peter, a new love interest for Laurie Metcalf’s character, on “The Conners,” an ABC spokesperson told TheWrap on Friday. The actor will be making his debut on the “Roseanne” spinoff during the Halloween episode, which airs Oct. 30 at 8 p.m. on ABC.

But before Broderick comes to Lanford, another big guest star will be stopping by, and he’s bringing by a romantic partner too. Yes, Tuesday’s episode, titled “Tangled Up in Blue,” will see the previously-announced return of Johnny Galecki, Darlene’s (Sara Gilbert’s) ex David, who is coming back with new girlfriend Blue (Juliette Lewis).

Justin Long will also recur as Darlene’s new beau, so, drama, drama, drama afoot for the whole Conners family. And they just (kinda) got over Roseanne’s death!

The ABC comedy serves as a spinoff to “Roseanne,” which was canceled after series creator Roseanne Barr sent out a tweet suggesting that former Barack Obama adviser Valerie Jarrett is a product of the Muslim Brotherhood and the “Planet of the Apes.” The star’s tweet caused an immediate backlash on Twitter and ultimately led to ABC’s decision to cancel the series.

Barr’s co-stars implored ABC to let the show go on, albeit under a different name. The network ordered 10 episodes of the spinoff back in June, starring original cast members Metcalf, Gilbert and John Goodman, and more.

The show made its debut Tuesday, using its premiere to reveal that the family matriarch was written off the series via her death due to an opioid overdose.

Broderick is about to be a busy man, having just landed this gig and a new high school apocalypse dramedy TV series at Netflix.