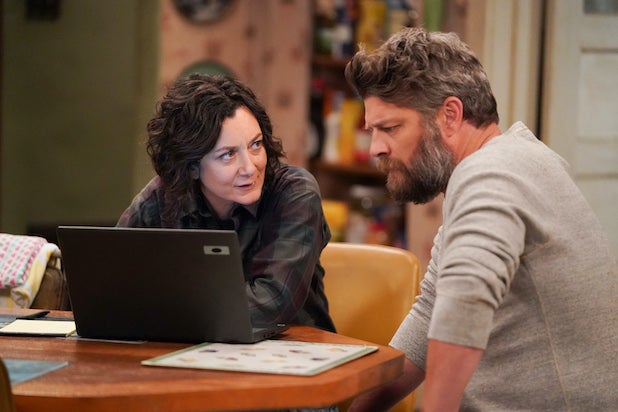 CONNERS - "Bridge Over Trouble Conners" - Darlene and Ben go apartment hunting as they take on the next step in building their life together. Jackie and Becky take Beverly Rose on a road trip to Mexico to meet her father for the first time while Dan reluctantly shares his financial troubles with Louise as he struggles with the pending foreclosure of the house on "The Conners," TUESDAY, MAY 5 (8:00-8:30 p.m. EDT), on ABC. (ABC/Eric McCandless) SARA GILBERT, JAY R. FERGUSON

ABC aired a quartet of sitcom season finales on Tuesday, including “The Conners,” but it wasn’t enough. NBC finished first last night in the key demo, CBS won in total viewers.

CBS, ABC and Univision tied for second in ratings, each with a 0.6/3. CBS was first in total viewers with 6.7 million, ABC was third with 3.3 million viewers, Univision was fifth with 1.7 million.

Fox was fifth in ratings with a 0.5/2 and fourth in viewers with 2.1 million, airing such a “Masked Singer” repeat.