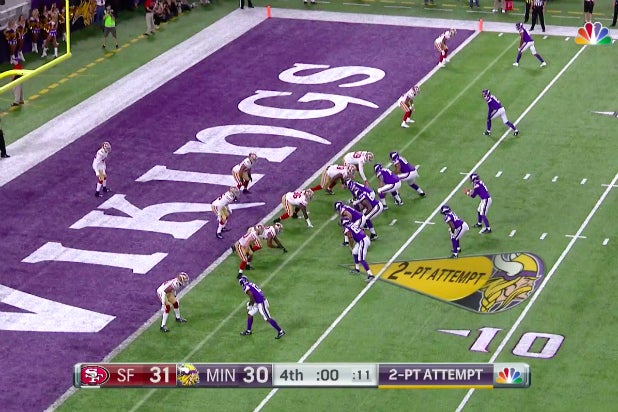 Labor Day means beaches, barbecues and yelling at the ref who missed that obvious pass interference call. It’s been a very long few months, but football is finally back.

But with the rapidly changing TV landscape, watching your favorite team isn’t so straightforward anymore, particularly for the millions of Americans that have opted to cut the cord in favor of cable alternatives, like YouTube TV and Sling TV, that have come online in recent years. Fortunately, TheWrap is here to help.

Here’s our comprehensive cord-cutters guide to the 2017-18 professional and college football season:

America’s most popular televised sport is also one of the easiest to watch without a cable or satellite subscription.

The league’s Sunday TV schedule is split between CBS, which broadcasts day games with visiting teams from the AFC, Fox, which handles the NFC, and NBC, which shows Sunday Night Football. The Super Bowl rotates between the three broadcast networks and is on NBC this year. Of course, all of those channels are available free throughout the country via the proto-cord method of watching TV, an antenna.

But for those who may not get good reception or live in a place where an antenna is impractical — or don’t want to have to go to a stationary TV to watch a game like it’s 1998 or something — there are plenty of streaming options, starting with CBS’ very own over-the-top product. CBS All Access costs $5.99 a month (or $9.99 without commercials) and includes NFL games, which vary by the local markets of its users. It carries the local CBS affiliate in about 75 percent of the country’s markets.

CBS, Fox and NBC are also available on almost every major streaming service, including YouTube TV, Hulu with Live TV, Sling TV, PlayStation Vue and Fubo TV, with varying degrees of coverage. DirecTV Now has Fox and NBC, but not CBS. It’s best to go to their sites to check which channels are available in which cities, but people in major markets and an increasing number of not-so-major ones can get those three broadcast networks plus NBC without a cable subscription or antenna.

The NFL is also simulcasting 10 games in its Thursday night slate, as well as a Christmas Day contest between the Pittsburgh Steelers and Houston Texans on Amazon Prime Video. Those games are also available on the NFL Network (available on Sling TV, PlayStation Vue’s “Core” tiers and higher and FuboTV’s Premier package) and five apiece (the Amazon games minus Christmas) are simulcast on CBS and NBC.

Also Read: We Found the One NFL Team That Would Sign Colin Kaepernick

Monday Night Football is exclusively on ESPN, which is available on YouTube TV, Sling TV, DirecTV Now and Hulu with Live TV. ESPN is not yet a channel on Fubo Premier, and it’s only available on Sling’s Orange offering (although subscribers can sign up for Sling Orange + Blue for $40/month, $5 less than they would cost independently).

Fans of the league’s addicting RedZone Channel, which bounces back and forth between live games and shows all scoring plays can watch that without cable, as its available on Sling TV (as part of the Sports Extra add-on it offers subscribers to its Blue package) and PlayStation Vue, as well as via a $1.99/month mobile add-on for Verizon Wireless customers. (Update: the day the NFL season started, Fubo TV also added RedZone to its $9/month Sports Plus Tier.)

But if you want to watch every game for an out-of-market team, cord-cutting comes up a little short. NFL Sunday Ticket, which broadcasts all NFL regular season contests, remains a DirecTV exclusive. It’s only available online for people who can’t get DirecTV service or active college students.

The NFL gets going Sept. 7, but college football already started and kicks into high gear over Labor Day weekend. And while NCAA football appears on a whole lot more channels than the pro game, they aren’t too hard to find on most internet TV services.

Fox, CBS, ABC and ESPN tend to broadcast many of the biggest games, with their downwind affiliates like ESPN2, ESPNU, FS1 and FS2 also airing several games each weekend. The ESPN and Fox Sports channels are available on all the major streaming services mentioned already, but not always on their basic tiers. The ESPN channels are only included in Sling Orange, while the Fox channels are restricted to Sling Blue, requiring both to get the full slate of Pac-12 football, for example.

Also Read: ESPN Pulls Robert Lee Out of UVA Football Game in Charlottesville Because of His Name

But for fans of those teams who won’t get selected for too many marquee matchups — and fanatics who can’t miss a single game against Directional Michigan — it gets a little more complicated. Fortunately, the proliferation of streaming services means most games are out there somewhere.

The country’s strongest conference, featuring preseason No. 1 Alabama, has a showcase “game of the week” on CBS most Saturdays, including some doubleheaders. The other games go to ESPN/ABC, ESPN2 and the ESPN-owned SEC Network, which is available on YouTube TV, Sling Orange, DirecTV Now’s “Go Big” package and up, and Hulu with Live TV.

The heartland’s conference’s marquee games like Ohio State versus Michigan show up on ESPN and ABC. It also has an in-house channel, Big Ten Network, which is available on YouTube TV, DirecTV Now’s $50/month “Just Right” package and up, PlayStation Vue’s “Core” tier and higher, Fubo Premier and Hulu with Live TV.

The conference, home of national championship contenders USC, Washington and Stanford, has deals with ESPN/ABC and Fox. Its games show up on those three channels plus their affiliates, including ESPN2, FS1, FS2 and the local Fox Sports channels.

The conference has its own TV outlet, the Pac-12 Network, which also shows a handful of games, including USC’s season opener against Western Michigan. Unlike the Big Ten’s channel, the Pac-12 Network remains relatively scarce on streaming services, although it is available on Sling TV’s Blue Sports Extra package and as of Thursday, Fubo Premier. The Pac-12 Network’s regional channels, such as Pac-12 Arizona and Pac-12 Los Angeles, are also available on Sling’s Blue Sports Extra and Fubo’s Sports Plus add-on, which costs an additional $5.99/month.

Also Read: How NFL Football Brought 'This Is Us' Back to NBC Tuesdays

The conference that includes last year’s national champion, Clemson, can primarily be found on ABC and the ESPN family of networks. ESPN is launching a linear ACC Network in time for next season, but its ACC Network Extra is currently available for ESPN subscribers through its WatchESPN app and on Sling TV.

ESPN/ABC and the Fox networks, including FS1, FS2 and the Fox Sports regional channels show the bulk of this conference’s games, featuring the likes of Texas, Oklahoma and TCU. The Big 12 no longer has its own network.

Notre Dame have to watch their team’s home games exclusively on NBC, while the school’s away games this year appear on ESPN and Fox. NBC’s sports cable network, NBCSN, shows Ivy League football as well as one Notre Dame home game this season, September 30 versus Miami University of Ohio.

The streaming future is finally here for football fans. It just requires a little game planning.