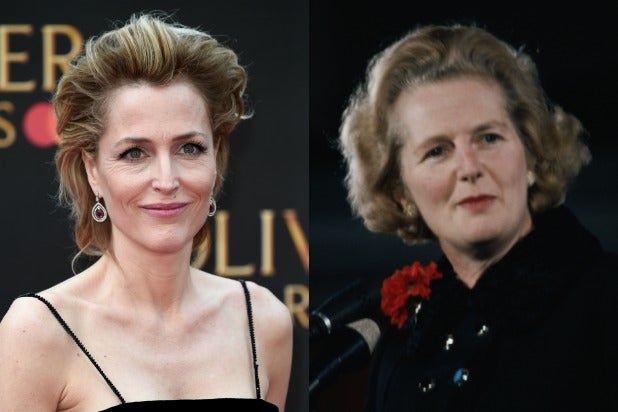 Production is now underway on the fourth season, even ahead of the Season 3 premiere on Netflix on Nov. 17. In a statement posted along with the announcement to twitter, Anderson was not shy in addressing just how “controversial” of a figure Thatcher was in British politics.

“I am so excited to be joining the cast and crew of ‘The Crown’ and to have the opportunity to portray such a complicated and controversial woman,” Anderson said in a statement. “Thatcher was undoubtedly formidable but I am relishing exploring beneath the surface and, dare I say, falling in love with the icon who, whether loved or despised, defined an era.”

Also Read: Olivia Colman on Replacing Claire Foy in 'The Crown': 'I've Got the Worst Job in the World'

Mention of Anderson’s casting was originally tossed around in January, when The Times UK wrote, “Margaret Thatcher is returning to British television screens, and this time she will be played by the X-Files actress Gillian Anderson, who is swapping her FBI badge for a handbag in the fourth series of the blockbuster Netflix series The Crown.”

Season 4 also recently added Emma Corrin as Princess Diana, portraying her during the period before she became the Princess of Wales.

Thatcher was the leader of the Conservative Party in Britain and was prime minister between 1979 to 1990, the longest-serving British prime minister of the 20th century and the first woman to hold the position. Dubbed the “Iron Lady,” Thatcher has been portrayed on film and TV by Patricia Hodge, Andrea Riseborough, Lindsay Duncan and Meryl Streep in an Oscar-winning performance in the 2011 film “The Iron Lady.” Thatcher passed away in 2013 at age 87.

Season 3 of “The Crown” is set during 1964 to 1977, and Olivia Colman has now replaced Claire Foy in the role of Queen Elizabeth II. Along with Oscar winner Colman, Season 3 stars Tobias Menzies as Prince Phillip, Helena Bonham Carter as Princess Margaret, Ben Daniels as Tony Armstrong-Jones, Josh O’Connor as Prince Charles, Erin Doherty as Princess Anne, Marion Bailey as the Queen Mother and Jason Watkins as Prime Minister Harold Wilson.

Anderson has most recently starred in the Netflix series “Sex Education.” In 2018 she made a return to her long-running character Dana Scully in a revived season of “The X-Files,” and she was also seen in the film  “The Spy Who Dumped Me” in 2018.