Olivia Colman should be getting used to looking regal by now.

Netflix has released a pair of new images for its upcoming third season of “The Crown,” courtesy of Entertainment Weekly, which show off the new versions of Queen Elizabeth, Prince Philip and Princess Margaret.

Colman will begin her two-season reign as the British monarch, taking the place of Claire Foy, as the Netflix series brings in an entirely new cast for the third season that jumps forward 12 years. The British actress is coming off her role as another monarch in the film “The Favourite,” where she portrayed Queen Anne.

Colman will have some tough shoes to fill, with Claire Foy earning rave reviews for her two-season portrayal of the Queen during the beginning of her reign.

The third season jumps ahead to the mid-1970s, covering the rise of Prime Minister Harold Wilson (Jason Wakins) and the decline of Princess Margaret and Antony Armstrong-Jones (Ben Daniels, who replaces Matthew Goode from season 2). The season will also introduce adult versions of Prince Charles and Princess Anne, who will be played by Josh O’Connor and Erin Doherty. The rest of the new cast includes Tobias Menzies as Prince Philip and Helena Bonham-Carter as Prince Margaret. 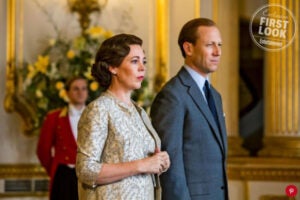 “The Crown” will return sometime in 2019 on Netflix. Go to EW to check out more images.