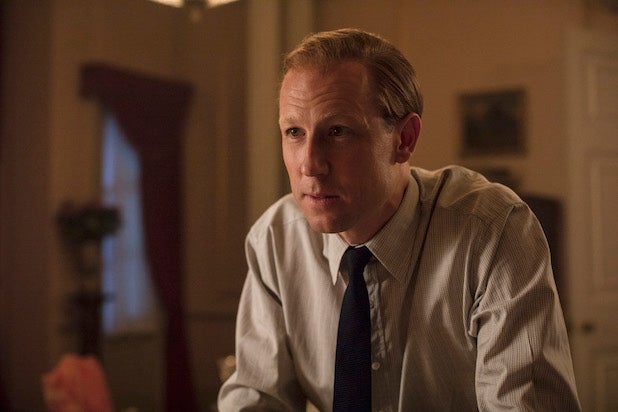 (Warning: This post contains spoilers for Episode 307 of “The Crown,” titled “Moondust.”)

The third season of “The Crown” contains one episode that is almost entirely devoted to Prince Philip’s obsession with the 1969 moon landing — or rather, Queen Elizabeth II’s husband’s obsession with middle age and what he’s accomplished with his life up until that point, as shown through his obsession with Buzz Aldrin, Neil Armstrong and Michael Collins, who landed on the moon.

Philip (played by Tobias Menzies) ends up meeting with the astronauts when the come to Buckingham Palace and realizes they are three men who are “pale-faced with colds” and says they have a “total absence of originality and spontaneity.” This is what leads him to seek guidance from Dean Robin Woods (Tim McMullan) at his “center of recovery and renewal,” which Philip had originally mercilessly mocked.

Now, if you are as obsessed with the fictional Philip’s obsession as we were, you might be surprised to hear that the specifics of this plot were made up by the Netflix drama’s creator, Peter Morgan.

“Just to be clear, there is no evidence that the real Philip did get obsessed with the moon landing,” Menzies told TheWrap. “That’s obviously Peter’s act of imagination. But what’s interesting about doing that, is through the lens of that extraordinary event we explore Philip a bit and what are the more complicated feelings he might have about what he’s done with his life. And it was a gift to have that material to work on and to be able to crack open someone who is pretty hard and doesn’t give a lot away emotionally. So to dig underneath the surface of him and what might be going on.”

The truth in the story is that the astronauts did visit the palace (though Menzies says he doesn’t think Philip had a private meeting with them). The other fact in the fiction is that Philip and Dean Robin Woods did become lifelong friends and they founded St. George’s House together, a center for the exploration of faith and philosophy.

“That was the start of a very long-running friendship he had with the Dean of Windsor,” Menzies said. “And they developed St. George’s House, which was a center for multi-faith interaction. They did lectures, retreats. And I think it was a real passion project for Philip.”

Menzies says the Queen’s husband, as he sees him, is “quite thoughtful about the role of the monarchy and his role within it.”

“You get a sense he’s a man of action, he keeps very busy,” the “Game of Thrones” alum said. “He’s one of the hardest working of them all in terms of the number of events he attends, how many functions he is present at. Whatever you think of the monarchy politically, or him politically, I think the dedication and service that he has given, he’s taken his role seriously and tried to be thoughtful about it. And there isn’t a playbook for a consort, a purely ceremonial role. So he’s had to work out how to give himself agency. And he’s developed all the charities he’s involved in, all of that.”

“The Crown” Season 3 is streaming now on Netflix.