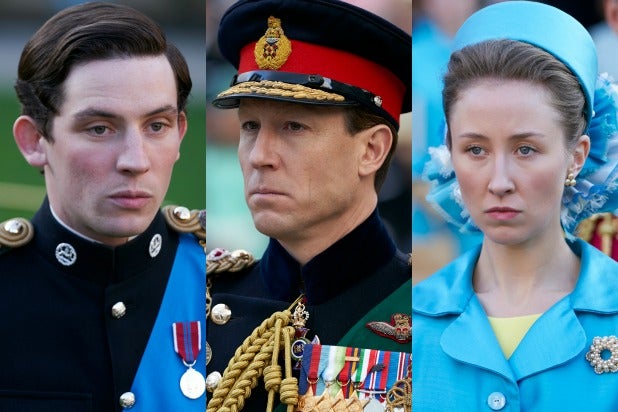 (Warning: This post contains spoilers through the end of “The Crown” Season 3.)

OK, so maybe there aren’t actually that many spoilers for “The Crown,” seeing as the lives of the British royal family are pretty much an open book to anyone who has access to the internet or, well, any number of books on the topic. But that doesn’t mean viewers of the Netflix drama who have already finished the show’s third season already know what will happen come the next, because creator Peter Morgan takes certain artistic liberties with history and weaves together well-known facts with behind-closed-doors drama.

So even though we know Princess Diana (played by Emma Corrin) will be arriving in Season 4, we have no idea what to expect to be told from the story we know — and the story we don’t. And while cast members Josh O’Connor (Prince Charles), Erin Doherty (Princess Anne) and Tobias Menzies (Prince Philip) were pretty tightlipped on the subject when TheWrap spoke to them earlier this month, they did give us a few things to get excited about, including more royal heartbreak.

“I obviously won’t go into exactly what we’re doing, but we’re shooting Season 4 at the moment and Emma’s doing an extraordinary job,” O’Connor said. “Look, we’re going from Season 3 and, as you know, we touch on the Camilla [Shand, played by Emerald Fennell] side. I think what will be interesting is that, you know, ultimately, we know so much about the Charles and Diana relationship, we specifically know a lot about Diana’s side of things, we also know an awful lot about Charles’ side of things. I think what will be interesting is how Peter navigates both sides of things and tells that story from what we know. And ‘The Crown’ is so brilliant at going from the real events that we know of, and going behind closed doors. And something I always find helpful about ‘The Crown’ is that, if you go back to Season 1 and Season 2 — and also Season 3 — no matter what you think is going to be told by Peter Morgan, what you think is the most interesting thing from that period, it always comes back to the crown. As in, it always relates back to the issue of the crown and power.”

“And Diana plays a huge part in the works of that,” he continued. “So it’s a really exciting season, Season 4. But Season 3 very much sets itself up for that. And also politically, with Gillian playing Margaret Thatcher, as well. I think that’s gonna be really great, too.”

Yes, Anderson will arrive next year, too, Thatcher wig and all. And as for Charles’ little sister’s romantic life, Doherty isn’t giving away anything.

“I don’t know what I’m allowed to say! I honestly don’t,” Doherty told us. “This is uncharted territory. I don’t know if I can say anything about Season 4. Honestly, they are so strict. I don’t think I can say anything of what happens to Anne. But it is history, so if people do want to know they could just look it up in the books! There we go.”

For Queen Elizabeth (played by Olivia Colman) and Prince Philip, Menzies says stability has set in.

“Broadly speaking, Peter’s writing has moved away from the internal turbulence of a marriage that was rocked by her having to become queen and the fallout from that. You see in Season 3, their marriage is calmer, more settled,” he told us. “They are headed into middle age, the challenges are coming from elsewhere, from outside. And yes, the children are starting to grow into the story, Erin Doherty as Anne and Charles by Josh O’Connor. And those are, for different reasons — especially the Charles relationship — a complication for Philip.”

“It’s quite well-documented that they didn’t have the easiest relationship,” Menzies continued. “It’s interesting that Peter actually wrote, the way he did that history is through omission. We have very few scenes together, Josh and I. It’s a relationship of absence, really. And that does continue into Season 4, when a regular motif of the show is interference in affairs of the heart. Obviously, the Princess Margaret [played by Helena Bonham Carter in Seasons 3 and 4, previously portrayed by Vanessa Kirby for Seasons 1 and 2] story was told in the early seasons. And it’s hard not to feel the echo of that in the family’s involvement around Charles and Diana.”