(Warning: This recap has Major Spoilers ahead for the series premiere of The CW’s “Kung Fu.” Don’t read until you watch the episode.)

It’s easy to get caught up in the action of the series premiere of The CW’s latest reimagining, “Kung Fu.” But at the end of the night, the series really turned into a mystery, thanks to one skilled fighter in particular — and her murder weapon of choice.

Before we meet her, we open on Nicky Shen (Olivia Liang) as she trains at a Shaolin monastery in China. She’s been honing her kung fu skills there for three years after running away from her family, and has developed a close bond with the woman running the place, Pei-ling. Now, Nicky is being pressured by Pei-ling to return home to San Francisco and face her family problems head-on.

But, before Nicky can make a decision, the monastery is invaded by raiders led by a mystery woman. Nicky is able to fight her way through to Pei-ling’s quarters, but arrives only just in time to see her mentor stabbed by the unknown woman with a sword. Pei-ling’s dying wish is for Nicky to get the sword back and protect it.

She comes close, but is bested in combat and thrown off a cliff. The good news is, Nicky is no ordinary woman. She manages to cling to the side of the cliff and eventually climb back up. She heads to the hospital, then to the police, and eventually, back home to the states. But just because she’s back home, doesn’t mean she’s letting Pei-ling’s death go unanswered.

The first mystery on Nicky’s plate: What makes that sword so special that Pei-ling spent her last words on it? Well, apparently, a lot. “Legend has it that the sword holds an ancient magical power,” Pei-ling says in a flashback. “A power beyond our imaginings.”

Thanks to some quick research by Nicky’s new handsome friend Henry (Eddie Liu), we quickly learn that the sword is actually the Sword of the Undhiyu. It’s believed to be one of eight weapons enchanted by an ancient Chinese sorcerer, and its magic can only be unlocked by its true owner.

Naturally, Nicky assumes that she definitely isn’t the sword’s true owner, since it burned her hand when she tried to grab it. Something tells me that the sword’s burn means the exact opposite, but we don’t know for sure just yet. What we do know is that because of that moment, the sword is currently in the hands of Pei-ling’s killer, who is apparently called Zhilan (Yvonne Chapman).

Obviously it’s a problem for the bad guy — or in this case, bad girl — to have a magic sword under any circumstances. But it’s even worse in this scenario. Because, as Handsome Henry so helpfully supplies once again later in the episode, “According to legend, there’s one big caveat. If someone can collect all eight weapons, their powers would be unlocked. They’d be unstoppable.”

Indeed, in the final moments of the premiere, we see Zhilan placing the sword in a hidden display case of some kind, as the first of what is expected to be multiple items. And so the hunt begins.

It’s a smart set-up, all in all. Seven items is just enough to be attainable, but still take a season’s worth of time to find (just ask Harry Potter). But now the question is: what even are the other seven weapons? It seems like finding needles in a haystack.

Well, we may have actually some idea. As Henry ominously explains the legend of the sword and its counterparts to Nicky, we see this drawing flash by, presumably from one of the books Henry got his information from. 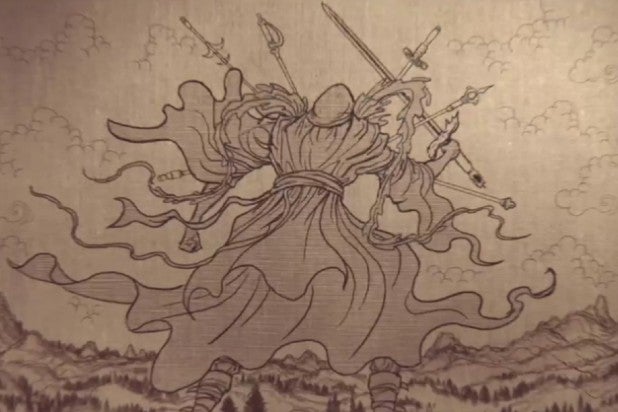 In it, a warrior is seen holding the sword in one hand while others protrude from parts of his or her body. (It doesn’t exactly look like the most practical way to wield multiple weapons at once, but we’ll roll with it). It appears that three of those weapons are other variations of a sword, along with two spears or scepters.

Considering the show made it abundantly clear that the sword in the warrior’s hand is indeed the same sword we saw at the beginning of the episode, it would track then that the other weapons in the picture are the ones enchanted by the sorcerer as well. Granted, this image likely isn’t an exact rendering of what the other weapons will be. But it’s also not a bad starting point. At the very least, it gives a vague idea of what to look out for the next time an ancient artifact comes on screen.

It’s also worth noting that there are not eight weapons in the drawing, but seven. What that eighth one is is anyone’s guess at this point.

That said, this animation is seemingly only shown to audiences. All Nicky has is a verbal explanation of the lore behind what she’s searching for. So it’s entirely possible that this was simply meant to be a visual aid to help the story along. We’ll just have to keep a close eye on things as “Kung Fu” plays out.