The trailer for the feature adaptation of Stephen King’s “The Dark Tower” was released Wednesday, and fans immediately uncovered some fun easter eggs that reference other King universes.

One fan on Twitter instantly analyzed a picture on Jake’s shelf when an earthquake rattles the city. The image in the frame is of the Overlook Hotel from 1980’s “The Shining,” which starred Jack Nicholson, Shelley Duvall and Danny Lloyd.

The Overlook Hotel from The Shining in the trailer for The Dark Tower pic.twitter.com/oVacqwIDei

But that’s not it — a part of the trailer also pays homage to King’s “It” — more specifically, Pennywise the Clown. In the trailer, Jake stumbles through the woods to find ruins of an amusement park. The giant collapsed sign reads “Pennywise House of…”

And if you look a little bit to the right of that, you can see a hand reaching out from the ground, holding four balloons. And there’s a tiny glimpse of a clown hat a little further up. 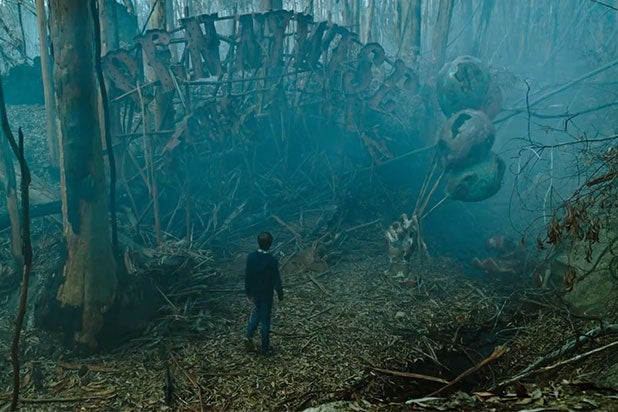 The Sony release, which is directed by Danish filmmaker Nikolaj Arcel, stars Idris Elba as Roland Deschain, a.k.a. The Gunslinger, a roaming knight of the Old West who resides in a parallel dimension known as Mid-World.

He crosses paths with Jake Chambers (Tom Taylor), an 11-year-old New Yorker with wanderlust who accidentally crosses over into Mid-World.

See Video: 'The Dark Tower' Trailer: Idris Elba and Matthew McConaughey Face Off in Other Realm

Together, the two go on a quest to save Mid-World from destruction, hoping to reach the titular Dark Tower and stop a dark sorcerer (Matthew McConaughey) from using it to control infinite worlds.