When costume designer Stephanie Maslansky was asked if she’d rather work on “The Punisher” or “The Defenders,” her answer was immediate. “I didn’t even have to think about it,” the New Yorker told TheWrap.

After being responsible for creating the looks on “Daredevil,” “Jessica Jones,” “Iron Fist” and “Luke Cage” — she’s currently working on the second season for Harlem’s indestructible hero — being able to do the same on “The Defenders” felt like the perfect culmination. It “was kind of the ultimate goal,” she said.

Maslansky was careful to bring each hero’s unique style and personality into “The Defenders.”

“I mean, each hero has a very distinct look, and of course a very distinct backstory, and way that they got their abilities,” she told TheWrap. “To take them from the comic book illustrations to live action, and give them, you know, heart, soul and brain, and a life… the whole point was to make fans look at them differently and accept different realities for them based on the fact that they’re now grounded in this gritty, authentic New York City as real human beings.”

One of those distinct looks in the comics is Daredevil’s horned outfit. But although Matt Murdoch, the person behind Daredevil’s mask, wears a costume, Maslansky said it’s unlikely the other three will end up in their own superhero outfits — sorry, comic fans. “We’re working on something that needs to feel authentic and needs to feel modern, and so the costumes take on a different meaning or value,” she said.

“We’re trying to evolve these people into the 21st century, and into live-action. Something that’s very relatable on a different level than the comic book illustrations,” she continued. “So, therefore, they’re not necessarily going to be wearing superhero costumes.”

Also Read: 'The Defenders:' Charlie Cox Tells Us Why 'Stakes Are Higher' Than Ever for Daredevil

S.J. Clarkson, who directed the first two episodes of the show, and previously worked on the first season of “Jessica Jones,” said she also “spent a long time looking at all the other shows” to keep each hero’s individuality intact.

“I think [Clarkson] did a really good job not so much making them blend together, but contrasting them,” Maslansky said.

To contrast the heroes, Clarkson and Maslansky stuck to a different color palette for each.

“What I wanted to do was re-establish “Jessica Jones”‘s really grey, abrasive world, and psychological way we shot that,” Clarkson said.  “And then I wanted to look at “Daredevil” and stay true to the red, and use red in terms of neon and have that real crunch in the black, and then Luke Cage’s world what I loved about it was the sort of ’70s feel… And then the other one was Iron Fist, which kind of had this more mythological, you know, marshal-arts tie to it which I hadn’t really been involved in and was very, very exciting to kind of delve into that world. So I wanted to stay true to all those characters and those color palettes. So “Daredevil” is red, Jessica a steely grey-blue, Luke had the oak and the browns, and then Dany kept to that green world of Iron Fist.”

Also Read: Finn Jones Pitches His 'Defenders' and 'Game of Thrones' Characters Against Each Other

The photo below, from the fourth episode of “The Defenders,” illustrates that. In the background, you can see the purple and blue tones to represent Jessica, and red and yellow tones representing Luke and Matt (Daredevil). There’s greenery on the table for Danny (Iron Fist). 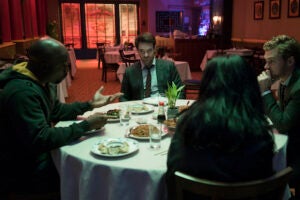 Now that “The Defenders” is over, Maslansky is setting her sights on Luke’s look in Season 2 of “Luke Cage.” While she couldn’t give too many details about the upcoming season, “there will be definitely will be evolution to his character,” she said.

“The interesting thing about Harlem [where “Luke Cage” takes place] number one is that there’s a timelessness there. You can see it in the way people dress, you can feel it on the street, I mean it’s a really old, old, old neighborhood,” Maslansky said. The golden tones associated with Luke “resonates a lot for the seventies.”

You can see how the differing aesthetics of each Marvel hero come together in “The Defenders,” now streaming on Netflix.

So, we’re ready for the next season of ”Daredevil“ on Netflix