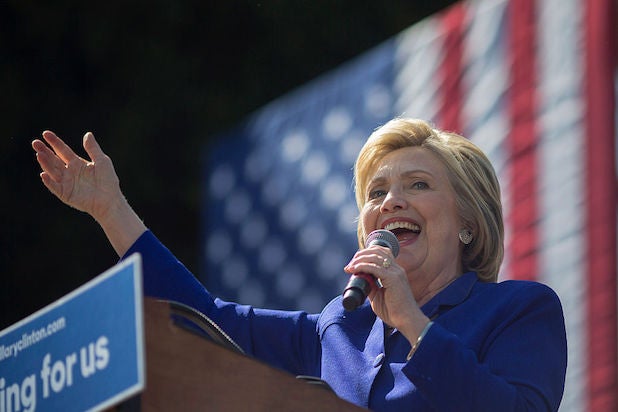 The Democrats have a star-studded turn out both on stage and off for their convention next week in Philadelphia.

Dunham posted a picture to social media which shows her and Ferrera holding up a T-shirt with the words “Love trumps Hate” sprawled across the front. The “Girls” star even took a jab at Melania Trump, hinting at her speech which sparked criticism after it was revealed that a good portion of it was plagiarized.

Honored 2 announce that @lenadunham & I will be speaking 2gether at @DemConvention in support of @HillaryClinton ! pic.twitter.com/fqAjTYQiHI

My soul sister @americaferrera and I are headed to the Democratic National Convention to speak as a team in support of @hillaryclinton. The honor! The thrill! We promise not to copy off Michelle Obama’s homework, dreamy as she is ???? #imwithher

Both Star Jones and Messing confirmed that they would also be speaking at the DNC with tweets featuring pictures of them with Clinton. Jones’ still sort of counts.

How ironic I was at the #WhiteHouse today when I confirmed I'm speaking @DemConvention next week for #45POTUS. pic.twitter.com/LpcArolPgj

Even basketball legend Kareem Abdul-Jabbar has expressed his excitement to be a part of Hillary’s squad.

Honored to be supporting @HillaryClinton @DemConvention in Philly next Thursday. Text KAJ to 47246 to keep up with me while I'm there.

Eva Longoria, Chloe Grace Moretz, Jason Collins and Tony Goldwyn are also expected to be at the DNC next week.