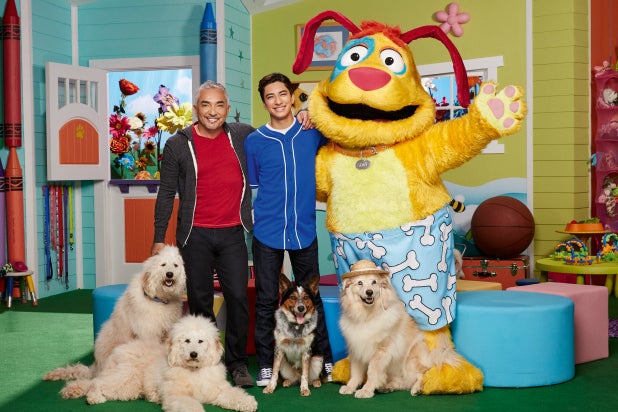 Sid and Marty Kroffts latest monsters are of the cuddly canine variety.

Nickelodeon is beefing up its preschool roster with “Mutt & Stuff,” a live-action series starring “The Dog Whisperer” Cesar Millan and his son Calvin (pictured above). The show, which will see its stars interact with a cast of both real dogs and puppets at its titular canine school, hails from the Kroffts and Bradley Zweig.

The elder Millan joins the creative trio as executive producer.

The series follows Calvin and his best friend Stuff, a larger-than-life dog with a personality to match, as they take preschoolers inside the doors of Mutt & Stuff, a school for dogs, to explore the daily lives of these canine companions.

In addition to showcasing adorable puppies and dog tricks, the series sets out to balance moments of heart and comedy with a social-emotional curriculum that helps preschoolers identify and manage emotions, build interpersonal awareness and develop social skills.

“‘Mutt & Stuff’ will capture the hearts and imaginations of preschoolers everywhere with its upbeat energy, heartwarming friendships and valuable lessons,” said Russell Hicks, president of Nickelodeon Group’s content development and production. “Sid and Marty Krofft have been entertaining kids for decades with shows that expertly blend fantasy and reality, and ‘Mutt & Stuff’ truly embodies their colorful signature style.”

Marty Krofft added: “From the moment we met with the Millans it was clear that partnering with them was going to lead to something extraordinary. Mixing their dynamic talent with the unmatched appeal of puppies and the quirkiness of puppets, we knew that ‘Mutt & Stuff’ would be a one-of-a-kind show that would pique the interest of preschoolers and enable us to connect with a new generation of kids.”