Far from the carnival of cruelty implied by its titular acronym, “The DUFF,” or “Designated Ugly Fat Friend,” is a generous, uproarious, and crazy-charming teen comedy that celebrates the unpredictable and idiosyncratic humanity of its characters. Once upon a time, intones high-school senior Bianca (Mae Whitman), there was the jock, the geek, the princess, the bully, and the basket case. But that was the ’80s. Labels don’t matter now.

At least that’s what Bianca believes until her meathead next-door neighbor, Wesley (Robbie Amell), brands her the DUFF of her beyond-gorgeous best friends (Skyler Samuels and Bianca A. Santos). Suddenly she notices, in one of the film’s best observations, that standing next to her friends makes her invisible, not just to her fellow students, but also to teachers and administrators. (Growing up doesn’t necessarily mean becoming a better or less superficial person.)

Because movie stars tend to look like, well, movie stars, few films have focused on a girl being forced to accept that she doesn’t look like what most guys want. That’s a big part of “The DUFF’s” freshness, as is writer Josh A. Cagan’s pretty close approximation to how teenagers actually talk (expect lots of salty language and pop-culture references). And there’s sympathy for guys who feel pressured to macho it up, too. “I would play ‘Call of Duty’ with her all night,” drools a guy awestruck by the hotness of one of Bianca’s BFFs. “And bang her too,” he adds sheepishly when he sees his buddies staring at him for not echoing their thoughts.

Once Bianca discovers that her besties noticed long ago that she isn’t as traditionally beautiful as they are, she decides to de-DUFF herself by avoiding her friends and finally going after her longtime crush Toby (Nick Eversman), a carry-his-guitar-everywhere type with heaps of wavy blond hair. In exchange for her chemistry notes, she enlists Wesley’s help because he never has trouble getting girls. And to the film’s colossal credit, his makeover of Bianca is mostly about building her confidence when talking to boys. (He doesn’t care too much for her multiple pairs of overalls, though; as much as the film believes in liking yourself for who you are, it draws the line at taking fashion advice from Wreck-It Ralph.)

You can probably figure out where this is going: the more Bianca gets to know Wesley, the better she can see past his cocksure bravado and sexual innuendos. There’s more to him than his bouncing pecs, and she doesn’t just have to see herself as the alterna-girl with dirty hair and date-free weekends. Whitman and Amell are a crackling comic duo — I seriously got flashbacks to Tracy and Hepburn — and it’d be a minor cinematic tragedy if they never appeared on screen together again. 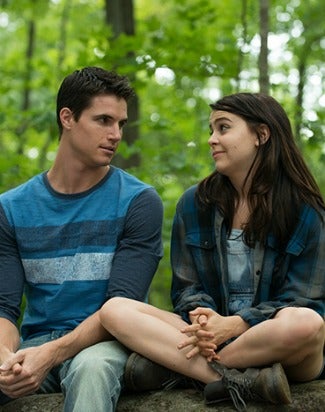 Standing in the way of their romance, though, is not only Bianca’s crush on Toby, but Wesley’s “it’s complicated” status with class bitch Madison (Bella Thorne). Their relationship is like a strobe light, observes Bianca: “on-again, off-again a thousand times.” Madison’s only objection to her ex getting together with Bianca is that she doesn’t want a guy she dated linked romantically with a DUFF, and so she humiliates her romantic rival with a nastily edited video that goes viral.

The cyberbullying angle is rather relevant, as is a goofy, escalating argument between Bianca and her BFFs about all of the different websites and apps on which they’ll now ignore/de-friend/unfollow each other. But director Ari Sandel’s best asset is Whitman herself, who proves to be one of the funniest actresses of her generation here. (Here’s the obligatory qualifier that Whitman – probably still best known as Ann “Her?” Veal on TV’s “Arrested Development,” is obviously neither fat nor ugly, but hey, someone had to play her part.)

Also Read: Sundance: ‘Advantageous’ Star Ken Jeong: ‘I Don’t Think I’m Jumping Naked Out of a Trunk in This One’ (Video)

Whitman achieves sparkling chemistry with virtually all of her scene-mates, including a somewhat subdued Ken Jeong, made more enjoyable than he’s been in a long time as Bianca’s journalism teacher, and a winsomely manic Allison Janney as Bianca’s kind but inattentive mother, a divorcee who, in a delightful character touch, becomes a self-help guru after being jumpstarted out of a midlife funk by “The Simpsons.”

There are, of course, a few quibbles to be had. The cyberbullying angle resolves perhaps a touch too conveniently, and Bianca’s climactic speech is a bit on the nose, even if the message doesn’t get any better for a movie aimed at teens. The film sorely needs some more gal-pal moments between Bianca and her BFFs; their devoted friendship is the one thing Whitman can’t sell, especially when Bianca begins to spend all her screen time with Wesley.

But there’s no doubt that “The DUFF” is clever, funny and quotable enough to become this decade’s “Mean Girls.” Watch your back, Regina George — there’s a new queen bee in town.