Telling a true story on film doesn’t relieve the writer or the director from portraying that event in a way that feels dramatically honest and coherent. This might seem like an obvious rule, but in a calendar year that opens with Michael Bay‘s “13 Hours” and now “The Finest Hours,” it seems like one that needs to be part of every film school curriculum.

There’s plenty of suspense and human drama to be gleaned from the story of a handful of plucky Coast Guard rescuers who save dozens of men from a sinking oil tanker in the stormy, freezing North Atlantic, but “Hours” rarely succeeds at finding it. This is the sort of film in which we’re told that a certain action is impossible, until it isn’t, or that a certain thing would never happen, and then it does, so even with all those lives on the line, the movie can’t effectively build up stakes or consequences.

Even the movie’s secret weapon — British actress Holliday Grainger (“The Borgias”), whose classic-Hollywood looks and poise would have made her the toast of RKO in the 1940s — can’t save the day, since she’s paired romantically with an uncharacteristically stiff Chris Pine in a love story that’s awkwardly inserted into the seafaring stuff.

See Video: Chris Pine Hits the Ocean to Save Casey Affleck in 'The Finest Hours' Trailer

On the night of Feb. 18, 1952, a nor’easter whipped through the seas off the coast of Massachusetts with enough force to tear two oil tankers literally in half. As the SS Pendleton’s chief engineer Raymond Sybert (Casey Affleck) tries desperately to keep the semi-ship afloat and to rally the dozens of remaining crew members to stay and fight rather then lower lifeboats into roiling seas that will immediately capsize those tiny craft, a Coast Guard station in Chatham, Massachusetts, springs into action.

Having already sent most of his men out to rescue the other tanker in distress, Warrant Officer Daniel Cluff (Eric Bana, with an ear-punishing southern accent) commands Bernie Webber (Pine) to cobble together a crew that will take a 36-foot wooden motorboat out to the Pendleton. 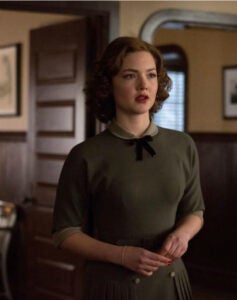 Before any of this happens, we see Bernie’s meet-cute with the outspoken Miriam (Grainger) while on a blind date, with a courtship that leads up to her asking him to marry her. He wants Cluff’s approval — it’s a formality at best — but the storm hits that same day, moving Bernie’s wedding plans way down the list of Coast Guard priorities. Once Bernie takes off for the Pendleton — with a ragtag crew that includes Richard Livesey (Ben Foster), Andy Fitzgerald (Kyle Gallner) and Navy man Ervin Maske (John Magaro, “The Big Short”) — Miriam can only take shelter from the storm with her fellow townsfolk and hope for the best.

Director Craig Gillespie (“Million Dollar Arm”) is clearly going for classic-movie sweep, with TCM-friendly moments like Bernie walking out to his ship instead of answering a ringing phone he knows is a call from Miriam. Some directors can get away with mining old tropes and clichés for their dramatic and entertainment value, but in Gillespie’s unsure hands, those appropriations come off looking like a lack of new ideas.

The script by Scott Silver, Paul Tamasy and Eric Johnson (who collaborated on “The Fighter”), based on the non-fiction book by Casey Sherman and Michael J. Touglas, undercuts itself around every corner, whether in its inability to integrate the romance into the action story, or in juggling too many characters, all of whom are vital to the story.

Heck, one of the cornerstones of this adventure should be that both rescuers and the rescued are wet and cold throughout, but until the word “hypothermia” gets mentioned late in , we see Bernie and his crew crashing through huge waves (in some impressive CG effects work) without even shivering.

Giving it their all is an impressive ensemble — if you’re playing Character Actor Bingo, you’ll leave with a full card. The vast cast also includes Graham McTavish, Abraham Benrubi, John Ortiz, Rachel Brosnahan and many other performers whose faces make an immediate impression, a must in a film with this many speaking parts. They even handle the New England dialect without embarrassment.

There’s also the matter of the actual rescue, which is quite harrowing and realistic; as in the recent “In the Heart of the Sea,” the effects team here fakes the ocean and its terrors with chilling verisimilitude. If only the writing and directing had approached a similar degree of realism.