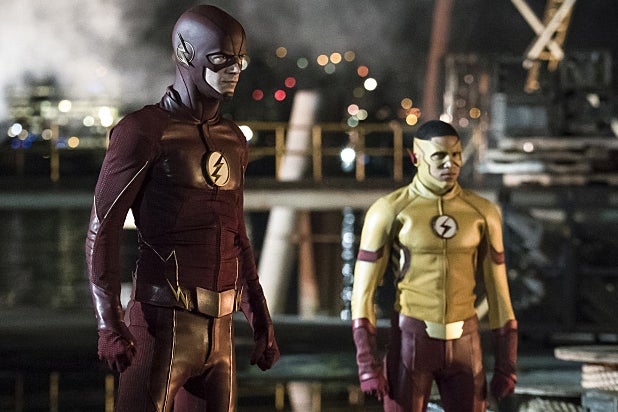 (Spoiler alert: Please do not read on if you haven’t watched Tuesday’s episode of “The Flash”)

For once, things seem to be working out for Barry Allen.

In the Season 3 premiere of “The Flash,” the lead character (Grant Gustin) is living an idyllic life, with his parents happily married and Iris West (Candice Patton), the girl he’s always admired from afar, accepting a first date invitation.

There’s even another Flash, keeping the city safe so Barry doesn’t have to.

But naturally, everything is about to all go very wrong.

That’s because this problem-free existence was created when, in the Season 2 finale of The CW superhero drama, Barry made the fateful decision to go back in time and save his mother from being killed by the Reverse Flash (Matt Letscher).

The alternate timeline, which the villain dubs Flashpoint, goes so well for Barry that he begins to experience dizzy spells during which his memories of the original timeline — where he’s The Flash, his parents are dead and Iris is his best friend along with the team from S.T.A.R. Labs — begin to disappear.

But life really goes really awry when he discovers that Flashpoint’s version of The Flash (don’t call him Kid Flash) is Wally West (Keiynan Lonsdale), Iris’ brother. In fact, the two of them are sort of a brother-sister crime-fighting duo, but they’re estranged from their father Joe West (Jesse L. Martin) and they end up needing Barry’s help to take down the speedster known only as The Rival.

The three seek out Cisco (Carlos Valdes), who is the richest man in America in this universe, though he’s a stranger to Barry and wants nothing to do with crimefighting. A quick kidnapping of Dr. Caitlin Snow (Danielle Panabaker) and the gang’s all here, though not quite as they used to be.

Barry and Wally take on The Rival, who reveals himself to be Edward Clariss (Todd Lasance) right before mortally wounding Wally.

At this point, Barry realizes he has no choice but to travel back in time once again and let the Reverse Flash kill his mother and set the timeline right. Barry’s arch nemesis is more than happy to do so, but he leaves Barry back in the righted timeline with an ominous message.

Also Read: 'The Flash'-'Supergirl' Musical Crossover Episodes in the Works

Inside the house he shares with Joe, Barry embraces the alive-again Wally, but is shocked to learn that Iris is estranged from her father — meaning Barry is not back in his own timeline after all.

In one final shocker of a kicker, this timeline’s version of Edward Clariss is awoken by a mysterious voice, who draws him to his window, says “it’s time” and writes the word “Alchemy” across the pane.

Young up and coming actors getting cast in film and TV include “The Flash,” “Fear the Walking Dead” stars

Alycia Debnam-Carey, who played Mia on Season 3 of "Dance Academy," gained notice for The CW's "The 100" and is a lead on AMC's new drama "Fear the Walking Dead"