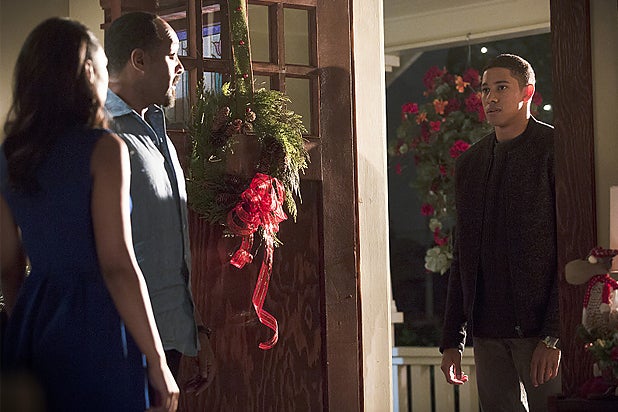 Wally West will make his long-awaited appearance on Tuesday’s episode of “The Flash,” and Keiynan Lonsdale, the actor who plays the iconic DC comic book character, teases more human drama for the character before the superhuman parts start taking over.

Wally isn’t Kid Flash just yet as soon as he arrives, but speed may already be in his blood.

“He’s a drag racer, that’s his passion,” Lonsdale told TheWrap. “Speed is already a big thing to him. So that’s going to create more issues.”

Of course, before he becomes Central City’s next super speedster, Wally will have a larger impact on the Wests, Iris (Candice Patton) and Joe (Jesse L. Martin). Iris, in particular, has already been affected by Wally’s mere existence, having found out she had a long-lost brother she never knew about.

Below, Lonsdale teased what to expect in Wally’s first episode, how he will shake things up in the West family, and what he’s looking forward to the most in becoming the superhero known as Kid Flash.

What can we expect from Wally in his first episode?
It’s really just his introduction. I can’t really say too much about how it goes down, but you see him meeting Joe and Iris. It’s going to be interesting, because it’s obviously going to shake things up. It’s going to be quite a different dynamic for the family. Everyone’s going to be faced with a new situation, a new challenge that isn’t involving a meta-human, it’s a family issue. It’s the beginning of all that.

Will we learn more about his past before he arrived in Central City?
We’ll get to know as much about Wally as he allows us to. He’s pretty to himself, but also quite confident at the same time. What we do know is he is a drag racer, that’s his passion. So speed is already a big thing to him. So that’s going to create more issues, because his dad is a detective, and his sister is a reporter. So they don’t really work together in that sense. But that’s his life beforehand. That’s something that he’s already been dealing with, and something you might get to see him do in coming episodes.

Have you gotten to work with the S.T.A.R. Labs crew yet?
Not much. We’ve interacted at some point, but Wally hasn’t really been introduced into that world yet. I don’t think he quite understands. Everyone’s kind of keeping him out of the loop.

Right, because he’s the new guy, so he has to be kept in the dark for a while.
Of course! I think it’s also extremely important for the West family, making sure that the family exists and that they can create a strong relationship. In terms of what’s relevant, even letting him know about that secret, isn’t even necessary. They’re thinking, let’s create a bond, let’s create a friendship and a family.

Have you tried on a uniform or done any stunts yet? Kid Flash, is he on the way?
Not yet, I want to though! I’m not sure when that will happen. I’m hoping soon, but it’s all being kept under wraps at the moment.

What are you most looking forward to getting to do as Kid Flash?
Mostly to be running side by side with The Flash, with Barry Allen [Grant Gustin]. That’s going to be something that’s really cool, and it’ll be really fun to shoot those scenes. I can’t wait to see what the suit is going to look like.

And one of my favorite things about any superhero scenario is when they go from regular everyday humans to figuring out they have powers. I think “The Flash” did that really well in Season 1 with Barry. I’m sure it’ll be different, but it’s always cool to see a new character develop new powers, so I’m looking forward to that part.

Have you gotten to film any crossovers with “Arrow” or “Legends” yet?
It hasn’t happened yet. I hope so. I have no idea when that would happen, but I think that would be really cool.

How have you found “The Flash” experience compared to doing “Divergent” or “Dance “Academy”?
It’s been awesome, all three jobs are so different. One thing that I’m getting used to, which I haven’t gotten to deal with before, is working with a new director each episode. When we did “Dance Academy,” we had the same director for four or five episodes before switching, and obviously “Divergent” was the same director the whole time. So that’s been really cool, getting to meet all these new people. The creative team changing, in a sense, all the time, so that’s exciting. We also shoot a lot. It’s been an awesome experience so far. I knew it would be, but it’s always nice to step back when you’re in the moment and look at everything that’s going on and appreciate it.