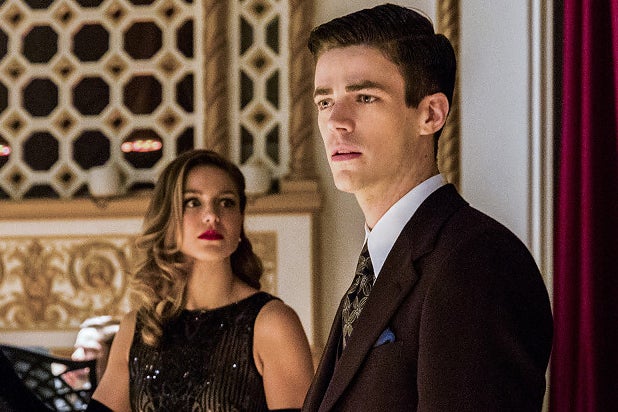 (Spoiler alert: Do not read on if you have not watched Tuesday night’s episode of “The Flash,” entitled “Duet.”)

The musical episode of “The Flash,” which featured plenty of crossover with “Supergirl’s” musically-inclined cast, brought with it a couple of new developments in the lives of the CW superheroes.

In the big twist of the episode, it turned out Music Meister (Darren Criss) wasn’t really much of a villain after all. He said all along he wanted to teach Barry (Grant Gustin) and Kara (Melissa Benoist) a lesson with his shenanigans, and it turned out that lesson is… Love.

The Music Meister targeted the Girl and Steel and the Fastest Man Alive because they were both having romantic relationship issues, the newly-arrived visitor reveals after Barry and Kara sang and danced their way out of a comatose state.

What they really needed was to realize the love between them and their recent ex-significant others were more important than the obstacles that broke them up in the first place.

In order to aid this realization, Music Meister creates a world where Mon-El (Chris Wood) and Iris (Candice Patton) are in love with each other, something Barry and Kara clearly have a hard time witnessing – even though they are technically different “characters” in this alternate universe.

In the end, the two superheroes are saved with a kiss from their respective loved one, and each relationship gets back on track.

In the biggest development of the episode, Barry finally proposes to Iris (Candice Patton) – for real this time, because he wants to, not because he’s trying to save her in the future.