“The Forest” is set in Japan’s Aokigahara Forest, an area infamous for the number of local citizens who go there to commit suicide, and those offended by the idea of a Western horror movie exploiting a real-life site of tragedy certainly have a point. After all, American viewers probably wouldn’t appreciate a Japanese production traveling to Ground Zero to make a 9/11-themed ghost story.

The accusations of cultural tone-deafness wind up being fairly moot, since “The Forest” turns out to be so generally inept and non-scary that to boycott it would give the film more attention than it deserves. It’s the kind of bland thriller that somehow bypassed a debut on DVD or video-on-demand and instead became a January-release horror movie that no one will remember by Valentine’s Day.

Natalie Dormer of “Game of Thrones” stars as Sara Price, who travels to Japan with the unshakable belief that her twin sister Jess (also Dormer) is in mortal danger. “The Forest” gets its one competent sequence out of the way early — cinematographer Matthias Troelstrup shoots a jet-lagged Sara from above and from below as she taxis her way through Tokyo’s crowded streets, as editor Jim Flynn (“The Other Woman”) intercuts her arrival with scenes leading up to her departure.

A visit to the school where Jess was teaching English freaks out the students, who assume that Sara is a ghost, but that’s where Sara learns that her sister took off to Aokigahara. Following her there, Sara finds that none of the locals are willing to put together a search party, and they all warn the visiting American about the dangers of straying from the paths and of going into the forest at night, as though this were suddenly a non-musical remake of “Into the Woods.” 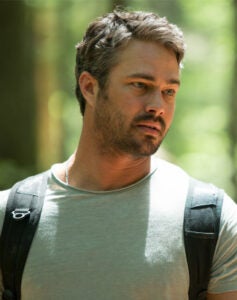 Sara talks Australian travel journalist Aiden (Taylor Kinney, “Chicago Fire”) into letting her tag along with him and ranger Michi (Yukiyoshi Ozawa) on an off-path expedition, and Michi warns her that the forest finds your sadness and makes you see things that aren’t there. They stumble upon Jess’ tent, and Sara insists on staying there overnight, but what’s supposed to be creepy and unsettling instead turns out to be a series of dull jump-scares and muddled storytelling.

By the time screenwriters Ben Ketai, Sarah Cornwell and Nick Antosca unpack the inevitable third-act reversals and twists, it’s too little, too late, especially since those revelations rely upon an investment in the characters that the movie has expended too little effort in creating. Dormer, for her part, invests herself in the proceedings, and manages to build two characters out of a script that barely bothers to give her one. (It’s worth noting that the British Dormer does a dead-on American accent, while Yank Kinney — so wooden here he could be playing the title role — doesn’t even try to sound like an Aussie.)

Jason Zada makes his feature directorial debut here after a very successful career in advertising. It’s a relief to know that he has a day job to keep. As for film critics doing their own work, the early-in-the-year arrival of a tepid horror movie like “The Forest” means the holidays are most definitely over.