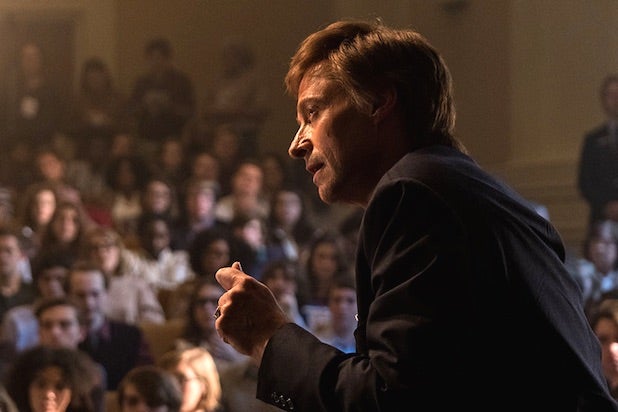 For all of its modern technology and progress, America has continued to live in the clutches of its puritanical roots when it comes to sex. When a sex scandal is thrown our way we can’t not look. Nothing can grab attention quicker, nothing can keep our attention longer. That is how we live now.

It wasn’t always that way, at least where political leaders were concerned. Jason Reitman’s new film, “The Front Runner,” which had its world premiere at the Telluride Film Festival, ponders the question whether politicians owe us transparency in their personal lives. And it also asks, in public life, is anything personal?

Hugh Jackman plays Senator Gary Hart, the leading candidate for the 1988 Democratic presidential nomination. Early in the primaries, he was polling ahead of certain Republican nominee George H.W. Bush, who was running on fumes from Ronald Reagan’s two terms, during which Bush served as vice president.

Hart had so much to say, much of it left over from George McGovern’s ill-fated 1972 campaign, which Hart helped to lead. He had energy behind his campaign, and it all was going so well until it wasn’t.

The Miami Herald was given a tip that Gary Hart was having an affair with a campaign aide named Donna Rice. Reporters staked out Hart’s home to gather “proof” of this affair and eventually went public with it, creating a firestorm. Hart genuinely seemed to believe it was just smoke with no fire, that nothing would ever derail someone with such good intentions.

“Follow me around,” he famously taunted, “If anybody wants to put a tail on me, go ahead. They’d be very bored.”

Bored is the last thing they turned out to be as the public ate up the scandal like candy. It was too much to resist. And just like that, it was over for Gary Hart and any of the people in America he might have been able to help, or any of the ways he might have forever altered the future of this country.

There was a time when the public thought personal lives should remain personal. After all, everyone knew that FDR had an affair, and that JFK was a famous womanizer. The public never condemned him for it — instead, he remains among the most beloved U.S. presidents in history. And even after Gary Hart, Bill Clinton won the presidency and served two terms with several women coming forward to say they had affairs with him.

So why was Hart different? Why did an affair with Donna Rice so successfully derail his campaign and political career?

The co-writer of the screenplay, and author of “All the Truth Is Out: The Week Politics Went Tabloid,” Matt Bai, believes it was several forces at once, including the high aim of breaking big Watergate-like news a la Woodward and Bernstein. Of course, shadowing Gary Hart and trying to catch him with his girlfriend was a far cry from ferreting out a corrupt President Richard Nixon.

But it’s also the way the news media began to change with the rise of tabloids during the 1980s. There was a thirst for scandals, not to mention how the women involved often made careers for themselves off the publicity. Maybe derailing Hart helped pave the way for Bill Clinton’s infidelities to be so urgently shunted to the side. Now, of course, we know there is no way the public could or would tolerate it from either man.

“The Front Runner” documents how things changed, why they changed and how quickly nothing seemed to matter. Hugh Jackman plays Hart as a rock that begins to crumble, though we never see him completely fall apart. That is left to the women in his life — mainly his wife, played by Vera Farmiga.

Reitman does not back off of Hart’s arrogance, nor does he try to excuse Hart’s actions. He presents a story. It’s then up to us, the viewers, to render judgment. Was it worth it? Did the press and the public do the right thing in obliterating his candidacy, making way for surefire loser Michael Dukakis?

Ultimately, it’s hard to watch “The Front Runner” and not wish for a different outcome for Gary Hart, for his wife and even for Donna Rice. And that’s not to mention his campaign staffers, who are mortified both because they were caught unaware with no way to do damage control and because Hart began to appear as a kind of a hypocrite — preaching about integrity but then lying to his staff and the public.

But the film steers clear of giving us an easy moral outcome. It neither shames Hart nor redeems him.

This is Reitman’s second film this year, after “Tully,” with Charlize Theron beating back postpartum depression. Though the director is known for taking risks and sometimes failing, pulling off these two very different films in the same year is be applauded.

Reitman is more in his element with “The Front Runner,” especially in the film’s first half, as we dive into what politics was like in 1988. The film has to manage disparate elements in its second half, like the Harts’ strained marriage due consideration alongside the political turmoil.

To its credit, “The Front Runner” doesn’t send us out the door with any easy solutions. It doesn’t tell us how we should feel or pretend to know all the answers. For some, that might be frustrating, but “The Front Runner” delivers more than enough provocative material to make it a wild, occasionally hopeful, often depressing ride.