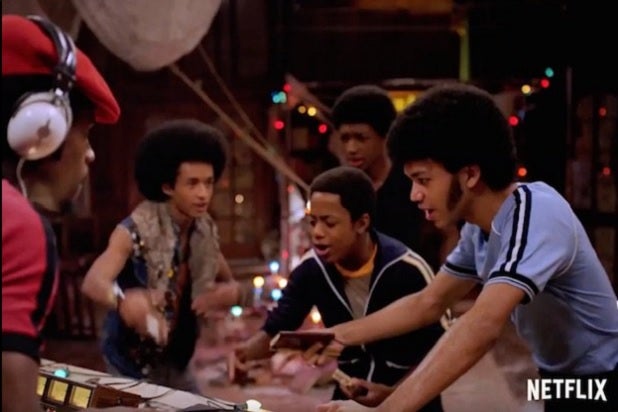 An origin story of sorts that offers a fictionalized recounting of hip-hop’s early days, “The Get Down” boasts plenty of vibrancy. But after three episodes it’s still unclear whether this ambitious Netflix series has come up with a narrative that’s as galvanic as the art form that inspired it.

Co-created by “Great Gatsby” director Baz Luhrmann, “The Get Down” samples from plenty of genres — blaxploitation, musicals, kung-fu flicks, gangster movies, coming-of-age teen romances — and benefits from a lively cast that exudes the same unbridled youthful energy that has been a hallmark of the director’s emotionally kaleidoscopic films. Unfortunately, all that spark is in service to some very melodramatic, overly busy plotting.

The first six episodes of “The Get Down” arrive on the streaming service August 12, with the second six hitting Netflix next year. The unveiling comes amid reports of a troubled production beset with a ballooning budget and a revolving door of creative personnel. Netflix made the first three installments available to critics, and all the money spent is apparent in every lavish frame. Unfortunately, so is the uncertain storytelling.

Also Read: Baz Luhrmann on 'The Get Down': 'I Always Knew It Wasn't My Story'

Ezekiel (Justice Smith) is a shy teen living in the South Bronx in 1977, his love of writing poetry butting up against his fear that a poor black kid doesn’t have much hope achieving his dreams. Luhrmann and co-creator Stephen Adly Guirgis, the Pulitzer-winning playwright of “Between Riverside and Crazy,” set in motion a you-are-there portrait of that infamous New York summer, which was plagued by record-breaking temperatures, massive blackouts and the lingering presence of the “Son of Sam” serial killer David Berkowitz.

As those events swirl in the background, Ezekiel pines for childhood sweetheart Mylene (Herizen F. Guardiola), a talented singer under the thumb of her conservative father (Giancarlo Esposito), a minister who doesn’t want her seduced by earthly delights like he was as a younger man. Mylene admires Ezekiel’s artistry but prefer they remain friends rather than becoming a couple. After all, she has her sights set on Manhattan, a recording contract and pop stardom.

Distraught, Ezekiel crosses paths with Shaolin Fantastic (Shameik Moore), a mythic graffiti artist who’s drawn to a new calling: He’s going to be a DJ. At a time when disco dominates, Shaolin is part of an underground movement that uses two turntables to manipulate the sounds on records. Instantly enraptured, Ezekiel and his friends (including Skylan Brooks and Jaden Smith) join Shaolin’s crew, dubbing themselves Fantastic 4 + 1.

Also Read: Baz Luhrman's 'The Get Down' Official Trailer Nails New York in the 1970s (Video)

Most viewers will recognize these early scenes as the foundations of hip-hop, while the more knowledgeable will spot that Ezekiel’s crew’s name is a play on the real-life late-’70s rap group Funky 4 + 1. This is in keeping with “The Get Down’s” merging of history and invented sequences — how, for instance, pioneering DJ Grandmaster Flash is a character in the series, while Ezekiel and many others are fictional.

Recruiting rap artists like associate producer Grandmaster Flash and executive producer Nas to serve as consultants, “The Get Down” captures the raw excitement of early hip-hop, the thrill of crafting new music from old sounds. Mimicking rap’s collage aesthetic, Luhrmann, who directed the first episode, envisions the series itself as a mash-up of styles. Of course, Luhrmann doesn’t need any encouragement in this regard: In movies such as “Moulin Rouge” and “The Great Gatsby,” he throws mismatched genres into a blender, reveling in his audacity and irreverence.

“The Get Down” exudes the filmmaker’s operatic, lovingly campy spirit, and in small doses there’s a sugary rush to his ecstatic sequences of crowded dance floors, fervent gospel choirs and kids hanging out on the roof of their apartment complex, dreaming of a bigger world. But it’s what’s in-between those standalone moments where “The Get Down” gets bogged down, the drab storytelling lacking the punch of the show’s period-rich production design and outfits.

Mylene’s pursuit of a recording contract and Ezekiel’s quest for hip-hop glory are mired in a-star-is-born generalities that aren’t enlivened by the compelling time period. And although the series has assembled a strong collection of reliable character actors, everyone from Jimmy Smits‘ oily councilman to Kevin Corrigan’s drug-addicted music producer, the fleshing out of these roles doesn’t reveal hidden depths but, rather, a soap opera-ish sprawl of buried resentments, secret pasts and wasted lives hoping for redemption. Add to that an unpersuasive crime-thriller element involving a shooting at a local hotspot, and you get a series that uses the birth of hip-hop as a backdrop for what is, so far, an overheated and spread-too-thin ensemble drama.

Three episodes in, the fate of the main characters’ artistic aspirations remains uncertain, but the young actors who play them are definitely going places. As Shaolin, Moore (terrific in last year’s Sundance hit “Dope”) has a sexy swagger. Smith (the best friend in “Paper Towns”) plays Ezekiel with charming bashfulness, his autobiographical poetry bringing darker, sadder emotions to the surface. As for Guardiola, a singer, dancer and model, she instills in Mylene a blossoming realization of her talent and sexuality, resulting in a nice balance of wholesomeness and maturity. Luhrmann’s flash may be the draw, but it’s his leads’ soul that will determine how high “The Get Down” soars.