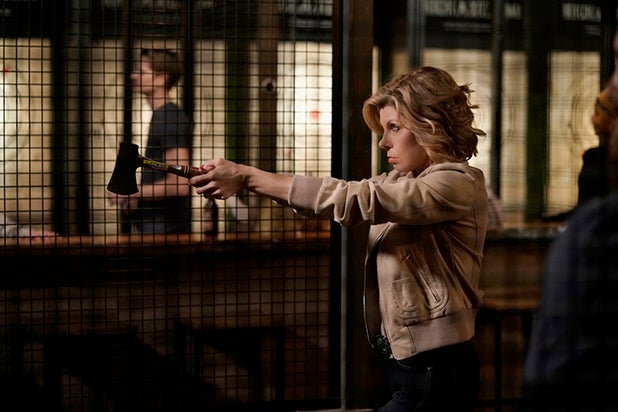 “Good Fight” duo Robert and Michelle King were able to keep some of the “nasty things” from the CBS All Access series when editing down the first season for its run on the broadcast network this summer.

“CBS was sympathetic because the point was the controversial language, you know? It wasn’t secondary, it was really the point,” Robert King told Vulture. King was specifically talking about the sixth episode of the season, which deals with online hate speech. “We were surprised that we were able to get some language that is intended to be offensive.”

In terms of editing out the curse words, the Kings said it was simple audio drop-out, like they do on “Survivor.” But keeping some of the specific terms — “porch monkey” and “kike” for example — was done so it wouldn’t dilute the entire message of the episode, which is being critical of that kind of language and the ill-effects it causes. “You need the power of all those nasty things being said,” Robert King said. Added Michelle King: “In order to talk about these things, you actually have to talk about these things.”

The other challenge was cutting down the running time to a broadcast-window friendly 42 minutes; most of the season 1 episodes ran over 50 minutes. For this, the Kings said they went back to their “Good Wife” days.

“When we did ‘The Good Wife,’ the language came very fast, almost in that kind of ‘His Girl Friday’ Howard Hawks thing where lines are overlapping and people are almost talking past each other because they’re talking so fast,” said Robert King. “So, really, it was returning to that kind of cutting style. Some of the scenes were exactly the same, but we took out the air between the lines.”

CBS will air the first four episodes of the CBS All Access series over two Sundays on June 16 and June 23 from 9-11 p.m., putting them within the Emmy voting period to give the show additional exposure. Beginning June 30, “The Good Fight” will move to 10 p.m., airing behind the new season of “Instinct.”

“The Good Fight” just completed its third season on All Access and was renewed for a fourth. The spinoff of “The Good Wife” starring Christine Baranski’s character debuted in February 2017 on CBS, before moving to All Access (CBS used the same strategy for “Star Trek: Discovery”).

You can read the full interview in Vulture here.