It’s hard to think of a genre that fetishizes white (virginal) femininity more than horror. Two of the most frequent tropes in slasher flicks, for example, are specifically tied to gender and race: the (white) girl who survives and the black guy who dies first.

Eli Roth‘s faux-smart, long-shelved, and exploitative-as-hell cannibal tale “The Green Inferno” is a remarkably perfect example of horror’s unexamined white privilege. Female genital mutilation on a light-skinned college girl is dangled as the worst possible fate a character can be subjected to, and the one dude who can pass for black is among the first to get his.

Jonah’s (Aaron Burns) eyes are gouged out and swallowed whole to roaring cheers. His tongue’s sliced off and gobbled up as well. He’s alive and conscious for all of it, though probably not for long, since the indigenous tribes people who have captured him and his fellow activists after their aircraft crashes in the Peruvian jungle quickly saw his limbs off to throw in the oven.

That scene happens fairly early in “The Green Inferno,” and it’s done with so much sadistic relish that it feels like anything could happen next. So gruesome and naturalistic is the eyeball-removal scene that I actively wondered if the film would make me vomit — an accomplishment in its own way. (Kudos to the special-effects team.) As far as extreme grossfests go, the latest from the “Hostel” and “Hostel II” director is ruthlessly effective, a well-calculated series of scenarios designed to crank up dread and gore with ever-escalating suspense.

A sheltered college student named Justine (Lorenza Izzo) ends up on a field trip to hell after she’s coaxed, then pressured, to participate in a save-the-natives social-media stunt in the Amazon. (Roth and Guillermo Amoedo’s script is at least on point about the superficiality of most campus-based do-gooding.) Justine’s roommate Kaycee (Sky Ferreira) is skeptical of the trip; “activism is so f–king gay,” she argues in the waxily synthetic first act’s best-written line.

Later, Justine and several of the other plane-crash survivors become captives of flesh-eating aboriginals — the very people they were trying to protect from murderous industrialists — who look like they’ve painted themselves with blood. In other words, Roth makes his Native South Americans literal “redskins.”

The caged activists are then killed and eaten one by one and the women vaginally penetrated with sharp objects and threatened with genital mutilation — just another day in the jungle as it’s framed here. Roth has attempted to evade charges of racism — alleged by several indigenous advocacy organizations — by listing several ’70s Italian cannibal flicks as inspiration during the credits. It’s also a clever touch that the college kids’ desires to be “white saviors” are turned on them by the reality of flesh-and-blood people who don’t care at all about the students’ good intentions. 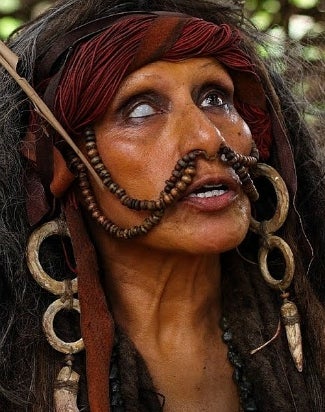 But those stabs at commentary and homage are overshadowed by the fact that the film’s flat depiction of indigenous tribes as feral, rapist savages is just another echo of dehumanizing depictions of native peoples previously used to justify colonialism and genocide. (That’s the dictionary definition of “adding insult to injury.”) Then there’s the morally questionable use of actual Amazonian villagers — who live so remotely in the jungle that they’ve never seen a movie or a TV show — to embody those offensive stereotypes about themselves, which brings up the issue of informed consent.

At best, “The Green Inferno” is a reliable shock and disgust-delivery system. At worst — and it certainly veers toward the worst — it’s a racially reprehensible work that exploits one of the world’s most powerless peoples. And no number of movie-geek references to “Cannibal Holocaust” is going to change that.