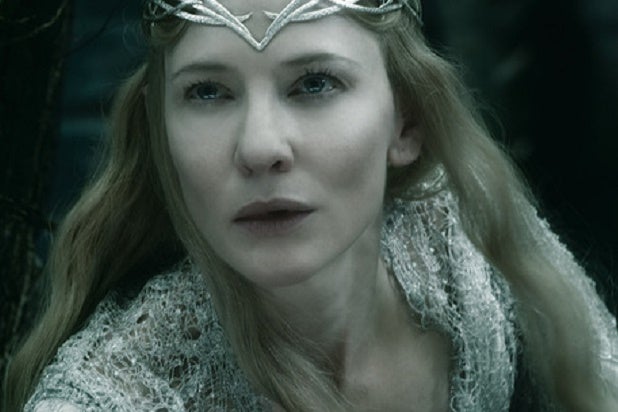 “The Hobbit: Battle of the Five Armies” held off a strong challenge from Angelina Jolie’s “Unbroken” and the record-breaking debut of Disney’s musical “Into the Woods ” to triumph for the second straight week as the holiday box office boomed and broke records.

Peter Jackson’s Middle Earth epic brought in $55 million since Christmas Day to hold off Universal’s Louis Zamperini biopic, which has rung up more than $47 million since Thursday, and “Into the Woods,” which posted the biggest opening ever for a movie adapted from a Broadway musical with $46 million, topping 2008’s “Mamma Mia!”

Both of those openings blew past analysts’ projections, by $10 million in the case of “Unbroken.” That, along with dynamic debuts by awards hopefuls “American Sniper” and “Selma” and strong performances by holdovers “Annie” and “Night at the Museum: Secret of the Tomb,” helped the box office break a month-long skid. It even topped last year’s long holiday weekend by nearly 10 percent.

Despite the good tidings at the holiday box office, much of the weekend spotlight was on “The Interview,” the Seth Rogen-James Franco comedy at the center of the Sony hacking storm. It took in an estimated $2.8 million from 331 independent theaters over the four days, as the major exhibition chains boycotted the film, because they were angry about Sony’s decision to offer “The Interview” on the largest online streaming sites at the same time.

“Five Armies” got a huge boost from Imax theaters, which provided $8 million from 360 locations, including all of the top ten runs. Imax sites have brought in nearly $25 million domestically and $48 million globally for “The Hobbit” franchise finale, which is up to $168 million in North America and $405 million overseas. Its $573 million global total after 12 days gives it a good shot at hitting $1 billion worldwide. .

The performance of “Unbroken,” an adaptation of Laura Hillenbrand’s bestseller by Joel and Ethan Cohen, was the biggest surprise. It starred newcomer Jack O’Connell in the inspirational saga of the Olympic star and World War II hero and prisoner of war Zamperini.

“I’m very proud that this film will be a part of Universal’s history,” said Nikki Rocco, Universal’s head of distribution. “Angelina did a terrific job of bringing out the emotion of what this man’s incredible life was like.”

The uplifting story of heroism resonated particularly well in the Heartland, she said, noting that the film connected with faith-based fans as well. It received an “A-” CinemaScore from audiences, which were 71 percent over the age of 25 and 52 percent women.

The Rob Marshall-directed “Into the Woods” connected in part because of a star-laden ensemble topped by Meryl Streep, Emily Blunt, Anna Kendrick, Christine Baranski, Chris Pine and Johnny Depp.

It received a “B” CinemaScore from its audiences, which were 57 percent over the age of 25 and 54 percent female. Families made up 38 percent of the crowd.

Also Read: Taylor Swift Single ‘Out of the Woods’ Shoots to No. 1 on iTunes Hours After Release

Three holdover films — Fox’s “Night at the Museum: Secret of the Tomb,” Sony’s “Annie” and Lionsgate’s “The Hunger Games: Mockingjay: Part 1” – all did better this weekend than they did last week.

The debut of “American Sniper” was the best ever for a limited Christmas release.

This was an Oscar-qualifying run, and the big showing will provide momentum when Warner Bros. opens the drama co-starring Sienna Miller next weekend. So will the rare “A+” CinemaScore it received from audiences, which were 62 percent male and 77 percent over the age of 25.