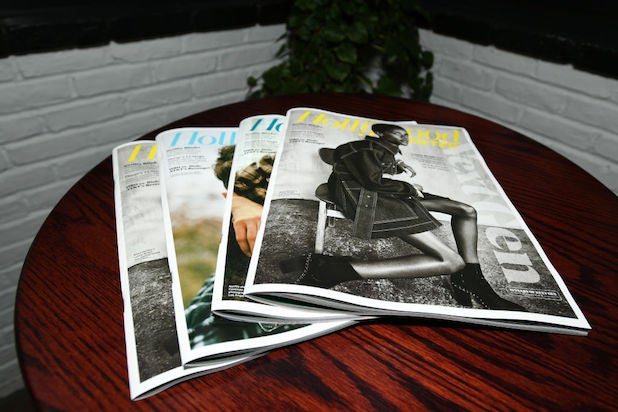 Valence Media, the parent company of The Hollywood Reporter, Billboard, Vibe Magazine and Dick Clark Productions, began widespread layoffs on Tuesday as part of an effort to reduce expenses and turn the company toward profitability.

As exclusively reported by TheWrap last week, the cuts are expected to rise to “$9-$10 million of personnel and headcount expenses,” according to an insider at the company. The downsizing, which will also include a reduction in print publication frequency for THR and Billboard, was initially slated to be even deeper, the insider said, since losses at the media company are estimated at about $18-$19 million a year.

At least eight staffers at THR were laid off on Tuesday, according to another individual with knowledge of the situation, with more layoffs expected to take place on Wednesday.

A Valence spokesperson did not respond to TheWrap’s request for comment.

Also Read: Fortune Lays Off About 10% of Staff, Executives to Take 30% Pay Cuts

On Tuesday, a number of employees across Valence’s publications began tweeting that they were affected by the cuts.

“I’m not even sure how to type this. I was laid off today with countless others at Billboard. It has been such a joy getting to know so many people in the industry & covering country music and Nashville. My email is in my bio as I try to figure out next steps,” Annie Reuter, Billboard’s country correspondent, wrote on Twitter.

William Ketchum III, Vibe’s deputy editor, announced that his position was eliminated as a part of the layoffs across Valence’s publications “in response to the coronavirus.”

“VIBE is a publication I’ve respected since I was a kid, so being offered the position of deputy editor was a dream job. Every day that I would go to our office in Times Square, I knew that I was following the lineage of one of the most important brands in the history of music/cultural journalism,” Ketchum shared in a statement on Twitter. “I’m immensely grateful for my time at VIBE, and I have no complaints. I’ll be taking time over the next few weeks to evaluate my options.”

After so many trips around the sun with VIBE, I'm sad to see it end like this. Myself, the rest of the staff and some great folks at Billboard were laid off today. This job changed my life in so many ways and I'm forever grateful for it. Excited to see where God takes me next.✨

i was laid off from billboard on this fine spring morning. would love to blog for you, edit for you, or produce your podcast. clips and email are in bio

Today myself & many colleagues at Billboard, Vibe & THR were laid off. I'm very proud of what we did in my 7 years at Billboard & ready to keep writing, editing, podcasting, creating. Hit me up for all things freelance (music, culture, sports, etc). Email & website are in bio 🙂

I am proud and lucky to have been part of a legendary team during my 5+ years at Billboard, which are ending all too soon. My heart goes out to all of my friends from Billboard and THR who are in the same boat. Please let me know if you need an editor or a producer.

The layoffs, which are expected to affect roughly 30% of the THR newsroom, come during a time of financial turmoil wrought by the coronavirus pandemic that has impacted numerous media companies across the country. But even before the pandemic, THR has been losing revenue for more than a decade, with losses as high as $30 million annually, according to executives with knowledge of the company’s finances.

In 2015, Guggenheim Partners — along with multiple other investors — spun off THR, Billboard Magazine, Adweek, Dick Clark Productions and Mediabistro to Guggenheim President Todd Boehly, who is now chairman and owns a controlling interest in all of those properties. Those properties were combined in 2018 with the production company Media Rights Capital, also known as MRC, under the umbrella of Valence Media, led by co-executives Asif Satchu and Modi Wiczyk. Since then, Valence Media is undergoing another rebranding, with Valence being renamed to MRC while The Hollywood Reporter-Billboard Group will be renamed the MRC Media.

Insiders with knowledge of the situation told TheWrap last week that in the days leading up to the layoffs, Satchu and Wiczyk had begun investigating editorial staffers who might have leaked information to the press about company operations amid heightened scrutiny around Belloni’s departure. A Valence spokeswoman denied that this was the case.