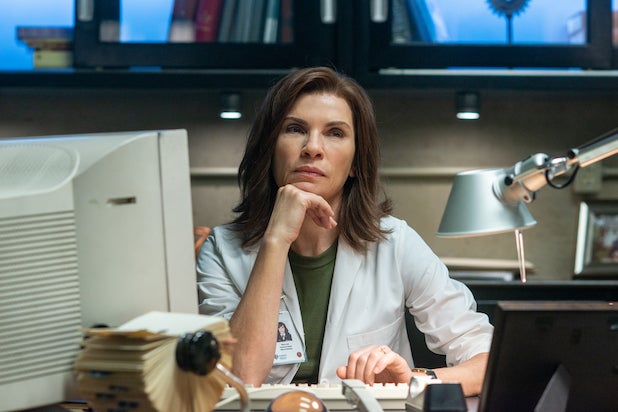 “The Hot Zone” is coming in hot for Nat Geo.

The Julianna Margulies-starring miniseries, which aired over three nights (Monday, Tuesday and Wednesday) last week, is now National Geographic’s most-watched scripted series of all time, with the previous record holder being “Genius: Einstein.” And for those keeping track, Nat Geo currently has seven scripted series to its name.

“The Hot Zone” averaged a .82 rating among the advertiser-coveted adults 18-49 demographic over its three-night-broadcast window, according to Live+3 data from Nielsen.

The event series comes in just behind “The Story of God With Morgan Freeman,” as the network’s most-watched series of all time and is the second-most-watched scripted series to premiere on ad-supported cable this year to date.

Across 12 broadcasts through the May 29 finale (including premieres and repeats), the series was viewed by 7.5 million people in the U.S.

“The Hot Zone” helped Nat Geo’s overall-primetime viewership shoot up 350% compared to the channel’s average over the previous six weeks. The May 27 series premiere lifted Nat Geo to the No. 5 ad-supported cable network in the key 18-49 demo for the night and No. 2 in overall sets of eyeballs.

Additionally, the average time a viewer spent watching “The Hot Zone” clocked in at 42.7 minutes, with 56% of viewers returning each day to tune in.

“While of course we are thrilled that viewers responded to this series in such a positive way, we also hope that it inspires them to learn more about the current Ebola crisis in Africa,” Carolyn Bernstein, EVP, global scripted content and documentary films for National Geographic, said.

Based on Richard Preston’s best-selling book of the same name, “The Hot Zone” is inspired by the true events surrounding the origins of the Ebola virus and its arrival on U.S. soil in 1989.

Along with Margulies, the series stars Noah Emmerich (“The Americans”), Liam Cunningham (“Game of Thrones”) and Topher Grace (“BlackKKKlansman”).