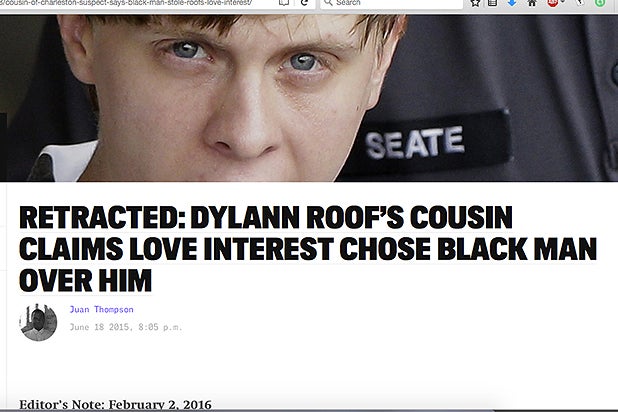 Thompson was an employee of the company from November 2014 until January 2016.

“Thompson fabricated several quotes in his stories and created fake email accounts that he used to impersonate people, one of which was a Gmail account in my name,” Reed said in a note to readers on The Intercept website. “An investigation into Thompson’s reporting turned up three instances in which quotes were attributed to people who said they had not been interviewed.

“In other instances, quotes were attributed to individuals we could not reach, who could not remember speaking with him, or whose identities could not be confirmed,” she continued.

Though Thompson’s stories remain online, they have been heavily corrected and one has been retracted in its entirety.

“After speaking with two members of Dylann Roof’s [the Charleston church shooter] family, The Intercept can no longer stand by the premise of this story,” reads the top of the post titled “Dylann Roof’s Cousin Claims Love Interest Chose Black Man Over Him.”

“Both individuals said that they do not know of a cousin named Scott Roof.”

The Intercept was founded in February 2014. Glenn Greenwald, Laura Poitras and Jeremy Scahill are the editors.