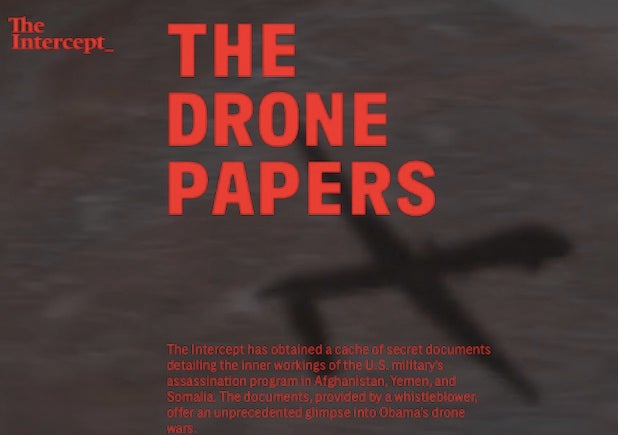 The Intercept published an explosive eight-part report on Thursday on America’s secret drone program with a new intelligence whistleblower serving as its central source.

“The Drone Papers” details the inner workings of the U.S. military’s capture-or-kill missions between 2011 and 2013, a time period when the use of drones accelerated.

The Intercept obtained a secret collection of government documents from a member of the U.S. intelligence community that pull back the curtain on internal reviews of drone missions, the development of “kill lists” and successes and failures of specific missions.

The digital site granted the source anonymity since the documents were classified and, as evidenced by the NSA’s pursuit of Edward Snowden, whistleblowers are under threat of criminal prosecution.

The Intercept said its whistleblower worked on the missions outlined in the report and decided to leak documents because he believed Americans should understand the process by which people are selected to be put on kill lists and later assassinated.

Also Read: Hollywood to the FAA: Let Us Use Drones! (Exclusive)

“This outrageous explosion of watchlisting — of monitoring people and racking and stacking them on lists, assigning them numbers, assigning them ‘baseball cards,’ assigning them death sentences without notice, on a worldwide battlefield — it was, from the very first instance, wrong,” the source said in the report.

He or she added, “We’re allowing this to happen. And by ‘we,’ I mean every American citizen who has access to this information now, but continues to do nothing about it.”