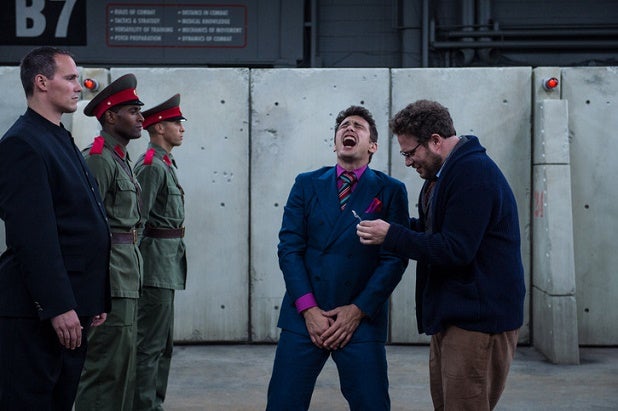 “The Interview,” the R-rated comedy at the center of the Sony Pictures hacking scandal, topped $1 million in its limited Christmas Day opening at the box office, the studio reported Friday.

Seth Rogen and James Franco’s film about an assassination attempt on the North Korean leader rolled out Thursday amid heightened security and under an intense media spotlight in roughly 300 small and independent theaters across the nation. Sellouts were reported at a number of locations, with many attendees saying that they were rallying behind the film out of patriotism and to strike a blow for creative expression. Sony had earlier scrapped the film’s nationwide opening after a massive cyberattack that the FBI has linked to North Korea.

“Considering the incredibly challenging circumstances, we are extremely grateful to the people all over the country who came out to experience ‘The Interview’ on the first day of its unconventional release,” said Rory Bruer, Sony’s president of worldwide distribution.

“The audience reaction was fantastic — the limited release, in under 10% of the amount of theaters originally planned, featured numerous sellouts and a first-day gross over $1 million,” he said.

Rogen and co-director Evan Goldberg turned out to thank moviegoers at an early showing of the film at L.A.’s  Cinefamily Theater, and a festive pep rally atmosphere accompanied the film’s debut at many locations. No major violence was reported, as many of the indie exhibitors ramped up security following earlier terror threats against theaters showing the film.

The big first day puts “The Interview” on course for a four-day box-office total of between $3 million and $4 million. That’s a strong showing for a limited release, but considerably less than the roughly $20 million that analysts had projected early, when the $44 million movie was originally scheduled to open in about 3,000 theaters.

The major chains were the first to pull out of the original wide release of “The Interview” in the wake of terror threats from hackers on Dec. 17, and Sony pulled the film hours later. The studio changed course a week later under pressure from President Obama, politicians and Hollywood’s creative community, and again offered the film to theaters. But AMC, Regal and Carmike opted out a second time when Sony said it would also offer “The Interview” on video-on-demand and via streaming on the same day.

Theater owners have fought for years to maintain their exclusive window on movies for years, concerned that it would cut attendance. Though day-and-date digital debuts are common for smaller and niche movies, Sony’s broad digital rollout of “The Interview” thus became the first day-and-date digital release for a major studio movie.

Not surprisingly given the publicity storm surrounding it, “The Interview” shot to the top of the download charts at YouTube Movies, Xbox Video and Google Play.