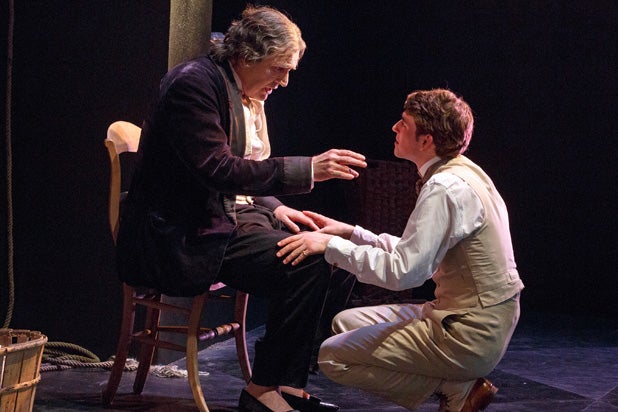 In the last 20 years, Broadway’s critics were probably most wrong about David Hare’s play “The Judas Kiss.” It opened to poor reviews in 1998, and wasn’t even nominated for a best play Tony, with far weaker works being cited, including “Freaks,” “The Golden Child” and “Art,” which won the top prize.

A new revival of “The Judas Kiss,” imported from the U.K., opened Tuesday at BAM’s Harvey Theater. It will be interesting to see how critics who trashed the 1998 production review this one, which is nothing short of brilliant. They will probably criticize the original star, Liam Neeson, for being miscast as Oscar Wilde, even though the actor is Irish and, also like Wilde, a very large man. To his credit, Neeson did not clutter his performance with the standard Broadway repertoire of gay mannerism to play the celebrated writer who was convicted of gross indecency in 1895.

Neither does Rupert Everett, who now plays the author of “The Importance of Being Earnest” and other classics. Critics will say that Everett makes all the difference, and they can now see “The Judas Kiss” for what it always has been: one of the great plays of the late 20th century and right up there with Hare’s very best, “Plenty.” Everett doesn’t make all the difference, which is not to say his performance is anything short of a revelation.

For anyone who knows this actor’s body of work, Everett’s Wilde is transformational. He disguises himself in a body suit complete with corset to hold in the plastic foam masquerading as girth. As expected, Everett is great at delivering bon mots and epigrams. A lesser playwright would have filled the play with Wilde’s own words. Hare, on the other hand, suggests Wilde’s style of witty subversion with his own one-liners, and he’s very good at writing them.

What is totally unexpected in Everett’s portrayal is a heavy lugubriousness that somehow never bogs down the humor but suggests the deep pathos waiting just underneath the padded, well-upholstered surface.

So many true stories of gross injustice don’t make great drama. The victims, whether they be Harvey Milk or the Scottsboro boys, are pure victims and the villains are 100 percent wrong.

Hare borrows a bit from George Bernard Shaw to avoid that dilemma: The villain of “The Judas Kiss” often speaks the truth, while the good guy offers the easy way out. The first act of “The Judas Kiss” depicts Wilde in a hotel room just after the trial. The pragmatic Robert Ross (Cal MacAninch), a friend and former lover, has set Wilde’s escape to the continent. The infamous Lord Alfred “Bosie” Douglas (Charlie Rowe), whose father led the homosexual accusations against Wilde, advises him to stay and fight. In the second act, Wilde is out of prison and living in Naples with Bosie.

Hare oversteps a little near the end of “The Judas Kiss.” His Bosie gives voice to a future gay civil-rights movement that does not belong in any 19th-century character’s mouth. But Bosie is right. Wilde never really spoke the truth. In fact, he instigated the notorious lawsuit by charging Bosie’s father with libel for calling him a sodomite.

MacAninch’s Ross nicely balances being practical and masochistic in his love for Wilde. Rowe’s Bosie could be a little less bratty in the beginning. A true aristocratic would never feel the need to raise his voice quite so much to the servants (the likeably tolerant trio of Elliot Balchin, Alister Cameron, and Jessie Hills). Missing here is a class distinction between Bosie, who’s to the manner born, and Wilde, who isn’t. Rowe, however, is very effective at disguising his truly base motives while also making them perfectly clear.

Also Read: 'Dido & Aeneas' Theater Review: From Broadway to Opera, Kelli O'Hara Does It All

Everett is a master of the spoken word. Yet, there’s a long silent moment near the end of the play that lingers longest. Bosie has brought a trick home for the night, and after his Italian fisherman (the stunningly built Tom Colley) has finished showering, he walks across the stage wet and stark naked in front of a very old and defeated Oscar Wilde. Everett inhales to puff up his cheeks and then slowly exhales as he lets his head drop slightly. It says everything there is to say about once having had everything and then losing everything.

Neil Armfield’s direction and Dale Ferguson’s set design take a very grand approach to the material, which is in no way stretched by their method.