To say that the Rams’ second year back in Los Angeles is a success would be the understatement of the year.

Boasting an 8-3 record heading to Phoenix, Arizona, to play the Cardinals on Sunday, the Jared Goff-led team proudly stands atop of the NFC West — even ahead of the perennial Seattle Seahawks.

Their outlook couldn’t be more different to this time last year under veteran coach Jeff Fisher, who was fired on Dec. 12 following a 42-14 blowout by the Atlanta Falcons.

But with a new young, dynamic coach in the form of 31-year-old Sean McVay, and running back Todd Gurley Jr. playing like the top Fantasy Football draft pick that many (including myself) hoped he’d be last year, the Rams aren’t just meeting fans’ expectations this season — they’re blowing them away.

Last week’s statement 26-20 win over Drew Brees and the New Orleans Saints cemented what has been a meteoric season so far for the Rams, and Vegas odds currently has them as seven point favorites over the Arizona Cardinals on Sunday.

“I am not going say it was easy, we just got the right looks and right situations. We connected more,” wide receiver Sammy Watkins (pictured below) said in the Rams’ locker room after the victory over the Saints. “We were so focused on being on spot and doing the right things.”

As for having a winning record for the first time in over a decade, “Being 8 and 3 — that’s the best feeling ever,” Watkins said. “Being on a winning team in general makes it easier for everyone to go out there and work hard.

“You know you have a confident feeling coming into the game and you’re gonna win this game. It makes everybody’s job easier,” he added.

Did someone say “playoffs”? 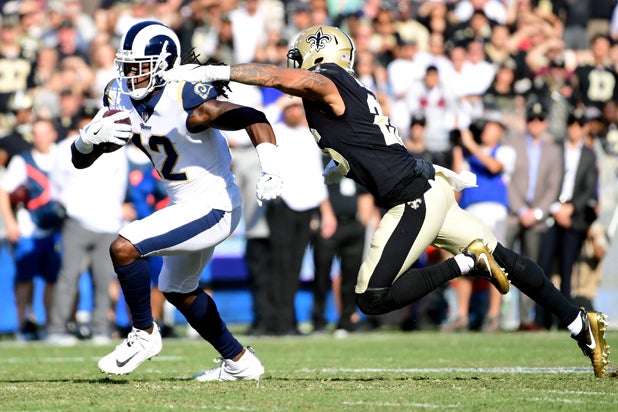 And just like L.A.’s No. 1 team should, they’re attracting a heap of Hollywood stars to the home games.

FYI, if you seat me here, I will wear your team’s hat. While I record the Packer game.

The Coliseum is also the largest — with a capacity of 93,607 — a fact that is often overlooked when critics point out the empty seats during home games. In contrast, the Los Angeles Chargers temporary home at the StubHub Center has a capacity of 27,000, and the University of Phoenix Stadium where the Rams and Cardinals play on Sunday only fits 63,400. Yep, that’s why the Coliseum is hard to sell out!

Before they take on the Cardinals, the Rams — like many other teams in the NFL — will take part in the “My Cause, My Cleats” campaign to support their favorite non-profit organization, wearing personalized cleats for pregame warm-ups (as long as they’re not offensive or express any political views, per NFL rules).

This week, approximately 1,000 players are planning to showcase their causes on-field during Week 13 games, nearly double the player participation from the inaugural year of the campaign. Athletes are backing worthy causes such as raising awareness for those battling diseases, getting clean water to Third World countries, domestic violence support and animal rights groups, cancer research and the Wounded Warriors.

Also Read: Why 'Golic and Wingo' Hosts Say New ESPN Show Is 'Like Putting on a Comfy Pair of Clothes'

Rams’ favorite causes include: Aaron Donald and Make-A-Wish, Gurley and Shriner’s Hospital, Goff and Sarcoma Foundation of America, and Tyler Higbee and the Special Olympics.

See Goff’s cool shoes for a good cause below.

Jared Goff's "My Cleats, My Cause" are in support of the Sarcoma Foundation of America, which raises money for sarcoma research and conducts education and advocacy efforts for sarcoma patients. pic.twitter.com/GfvcWUrmTk

The Rams-Cardinals game kicks off at 1:25 p.m. PT on Fox this Sunday.

Are you ready for a lot of football, Los Angeles?

Football is finally back in Los Angeles, with the Rams and Chargers set to ensure that their upcoming $2.6 billion stadium has all the Hollywood glamour and VIP amenities that you'd expect for A-list clientele along, with the football necessities for die-hard NFL fans. TheWrap recently got a sneak peek at the L.A. Stadium and Entertainment District -- check out the coolest aspects.