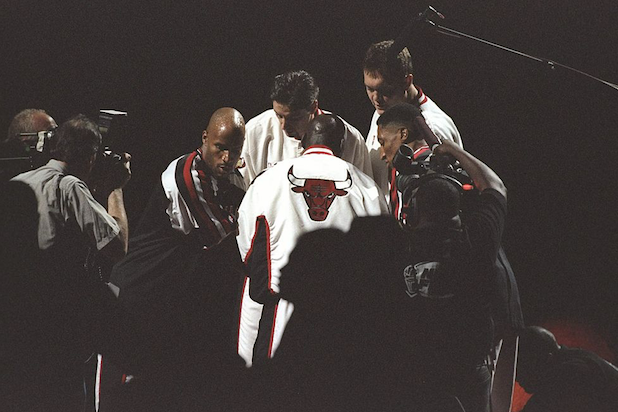 Michael Jordan is best known for his prolific scoring ability, but he’s still handing out assists years after playing his final NBA game.

The Alan Parsons Project received one of those assists, thanks to the popularity of “The Last Dance,” with the English progressive rock band’s 1982 song “Sirius” enjoying a 335% increase in streams in the past month on Spotify, a person with knowledge of the company’s internal metrics told TheWrap on Monday.

What’s the connection? “Sirius” also doubled as the Chicago Bulls’ intro song during Jordan’s ’90s heyday, serving as the unofficial soundtrack to the franchise’s six NBA title runs during the decade. The nearly two-minute instrumental track has since become a beloved artifact of a bygone era for hoops fanatics, right alongside John Tesh’s “Roundball Rock,” aka NBC’s basketball intro song. And recently, “Sirius” has found new life on Spotify, with the song being prominently featured in ESPN’s 10-part documentary on Jordan and the Bulls.

If you haven’t heard track before, here’s a taste:

The person familiar with Spotify’s metrics was unable to share how many total streams the 335% increase translated to over the last month. Overall, the song has more than 19,700,000 streams during its entire run on Spotify.

This wasn’t the first time The Alan Parsons Project received a little pop culture boost, either. You might remember Dr. Evil in “Austin Powers: The Spy Who Shagged Me” unknowingly naming a weapon he installed on the moon after the band.

“The Last Dance,” which chronicled Jordan’s career and was framed around his final season with the Bulls, has been a ratings boon for the sports-starved ESPN. It premiered last month to the highest ratings ever for an ESPN documentary, with more than 6 million watching on ESPN and ESPN2. Over its first eight episodes, “The Last Dance” averaged 5.8 million viewers. The final two episodes aired on Sunday night, and the ratings are expected to be released later on Monday afternoon.