Magic is both the beating heart and the Achilles’ heel of “The Last Witch Hunter,” yet another tale of a monster-chaser who saves the world, finds true love, and looks incredibly handsome doing both. But the fantasy action-thriller’s real draw is the fanciful and fantastic special effects, like the witch with legs of loosely braided branches and the warlock who disappears in a dense cloud of indigo and ochre butterflies. Also showcased is one of the most beautiful apocalypses I’ve ever seen: the cars below and the skyscrapers above an empty downtown Manhattan boulevard conquered by lush vines and greedy lianas.

But the narrative elasticity of magic — you can do whatever you want, whenever you want, to whomever you want — makes for a weightless story with little logic or stakes. The convoluted plot feels driven by the special effects instead of the other way around. Witches and warlocks are formidable until they’re not, and fragile as a sugar cube when director Breck Eisner (“The Crazies,” “Sahara”) has a new visual he wants to show off.

Also Read: Vin Diesel Plays a Round of Dungeons & Dragons for 'D&Diesel' (Video)

“The Last Witch Hunter” aims for pulpy, comic-book fun, but it’s never as fleet, funny, or detailed as it needs to be. And if you’re looking for something above middling in terms of plot, characters, world-building, even action sequences, you’ll need to seek it elsewhere.

Vin Diesel stars as Kaulder, a witch hunter who’s been keeping the supernaturally inclined population in check for the last 800 years. Cursed with immortality by the sorceress he killed, Kaulder has finally reached a truce with the witch community: as long as they don’t harm humans, he’ll leave them alone. His exploits are chronicled by the priestly Dolan 36th (Michael Caine, apparently in the market for a new house), who’s quickly murdered and replaced by the rookie Dolan 37th (Elijah Wood).

The cinematic equivalent of Velveeta, Diesel is unmistakably modern and synthetic. In his brief scenes with Caine, he comes across as amateurish next to the screen legend, and his every utterance of “Hey, kid” to the elderly British actor sink with waxen forcedness. Bereft of gravitas and chemistry, Diesel pantomimes, but can’t reach, Kaulder’s pathos about having been alone for nearly a millennium; he’s too wooden to have a weak spot. Nor can he sell the former Viking’s centuries-old attachment to his wife and daughter, who obtrude in visions and hallucinations as persistently and as irritatingly as phone calls from a clingy ex. 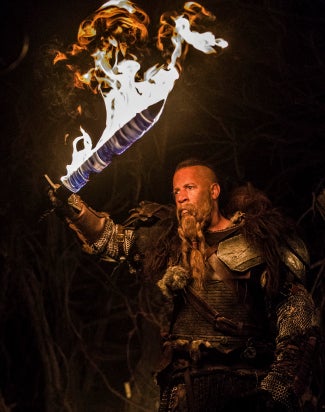 It’s a relief when the crackling Rose Leslie (“Game of Thrones”) enters the picture as Kaulder’s sidekick-love interest Chloe, a witch with the power to undo some of the mind-control spells aimed his way. Leslie doesn’t have much to do, but the script (by Cory Goodman, Matt Sazama, and Burk Sharpless) at least allows itself some levity during her scenes. When she initially knocks out Kaulder with a hex (at his request), she crouches by his head, squeals “The last witch hunter!” and takes a selfie next to his passed-out body. Later, Kaulder teases her for signing up for witch-identity mailing lists that call him a “genocidal fascist.” (Too bad the tangled storyline couldn’t tie itself in one more knot to include a classroom scene about Paranormal-American studies.)

The rest of the movie isn’t clever enough — and the plight and power of the witches too ill defined — for the script to keep dragging down the proceedings by giving Chloe the blues about her people’s oppression. And while it’s delightfully dorky to watch fight scenes in which the weapons include swinging axes, flaming swords and sparkly pixie dust, the editing is occasionally so choppy it’s difficult to discern what’s happening on screen.

The storyline slows to a crawl in the third act, which is mostly an excuse to blow the budget in the special-effects bay. But the magic is gone by then, having exhausted itself and its audience. You know you’re in a cauldron of trouble when even a glistening gummy-bear tree can no longer sweeten the pot.