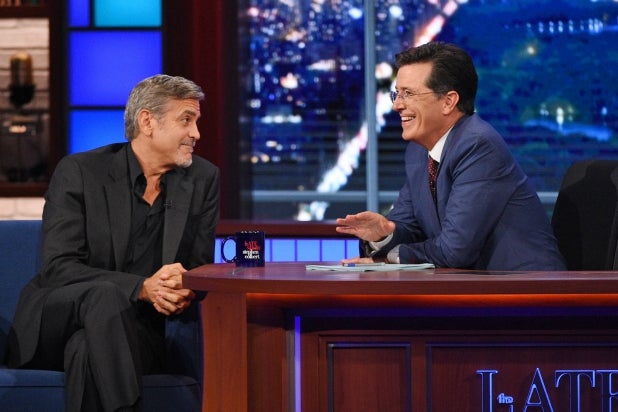 From the moment his tenure as host of CBS’ “The Late Show” began Tuesday night, Colbert evoked the ultra-patriotic blowhard character he channeled for nearly a decade on Comedy Central’s “The Colbert Report.” The cold open featured the host singing “The Star Spangled Banner” while standing alongside ordinary Americans in ordinary settings–a bowling alley, a farmer’s field. It was the show’s second most marvelous moment, and it ended with Jon Stewart, the erstwhile “Daily Show” host who grew Colbert from his own rib, dressed as an umpire and shouting, “Play ball!” From there we cut to the opening monologue (yes, there was one of those) which Colbert kicked off by addressing the audience with the same familiar greeting he employed in the “Report” days–“Nation.”

It felt good to hear that again. In all the talk about how “The Late Show” would unmask the real Colbert– “With this show,” he joked, “I begin the search for the real Stephen Colbert; I just hope I don’t find him on Ashley Madison”–what got undermined was the fact that the Colbert we’ve known was a guy that was really fun to watch on TV. The Colbert who showed up on CBS at 11:35 p.m. turned out to be a different side of that guy, but still that guy. It was nice to see him.

And never more so than in a desk bit in which Colbert binged simultaneously on Donald Trump jokes and Oreos. This was the show’s high water mark. “Like all of the mainstream media, I will be covering all of the presidential candidates who are Donald Trump,” Colbert said. He then proceeded to fire off zinger after zinger (“Trump’s not even white. He’s more Oompa Loompamercian”) while downing Oreos, unable to tear himself from either. It was the sort of satiric media criticism the “Report” excelled at. But it also felt genial. Colbert wasn’t just taking the piss out of Trump. He was taking the piss out of himself and his comedian instinct to grab onto Trump and squeeze every laugh possible from him. The fact that Colbert can’t help himself lets the rest of us not feel so bad about not being able to help ourselves. So we laugh together.

Now about the monologue. The jokes were mostly solid, but anodyne–“You’re all witnessing television history, and like most history, it’s not on The History Channel.” Colbert projected enthusiasm, but it felt like he was in a hurry to get through the segment and to the desk. It’s easy to imagine his monologue improving with time, but it’s just as easy to imagine it vanishing from the show, as Seth Meyers‘ did from “Late Night.” The desk segments felt more natural, allowing Colbert to play with graphics and props and be more his weird self. A gag featuring CBS CEO Leslie Moonves felt like a hat-tip to David Letterman, both in its structure and its casting.

The guest interviews were not great, and if you were forced to choose an area where Colbert might struggle in the new show’s early days, that would be it. The man spent a long time asking his guests the questions a self-absorbed jackass would ask. He has to find a new way to interview now. He tried Tuesday night, but got little help from his guests. George Clooney was George Clooney–charming and game, but not really pushing the host in any interesting ways. Jeb Bush was as boring as prospective voters appear to think he is. Booking a guy whose defining trait is dullness was the one major mistake made in the ramp up to this premiere. The music segment at the end, featuring band leader John Batiste, Mavis Staples, Colbert and a bunch of mostly b-list special guests (Ben Folds?) performing “Everyday People” felt confusing and chaotic.

That said, Colbert looked like he was having real fun up there with Batiste and Staples. In the post-Letterman era, fun-having has become the most desired quality among late-night hosts. It’s the strong suit of Colbert’s NBC rival, Jimmy Fallon, who made two surprise appearances on the show last night. It’s also a strength of James Corden, the British variety performer whose “Late Late Show” now follows Colbert. For the premiere of the new “Late Show” to be a success, Colbert, like those guys, needed to convince us that he was having fun. And like the other Stephen Colbert did for so long, he needed to make us have fun watching him.