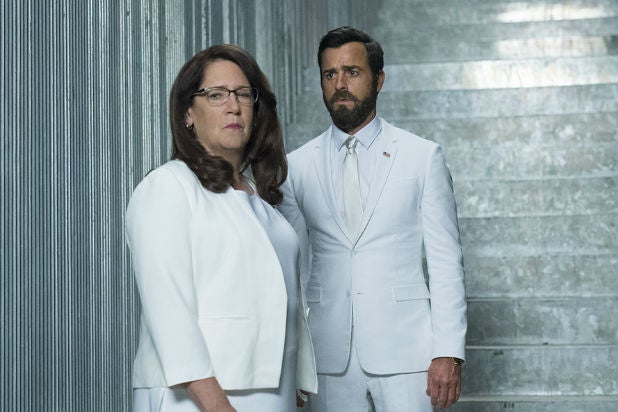 “The Leftovers” has never been a show to offer its characters beginnings. Those are hopeful little things, free from the past and typically sparked by closure.

The idea itself is laughable for Damon Lindelof and Tom Perotta’s show about the probable end of the world and the 98 percent of the population that did not make it to a better place.

But the penultimate episode of the series just aired — “The Most Powerful Man in the World (and His Identical Twin Brother)” — and a returning character told TheWrap that it’s more a pure beginning than we would suspect.

We’re talking about Ann Dowd as Patti Levin — a troublemaker in Season 1 as the leader of doomsday cult The Guilty Remnant, and then the haunting spirit of Season 2 who appeared in visions to Kevin Garvey Jr. (Justin Theroux) and slowly chipped away at his sanity.

Patti was such a doozy, and a career-best for the underrated Dowd, that we’d have been shocked if she didn’t resurface in some form despite being vanquished at the end of last season. Dowd, on the other hand, assumed she was done for good.

“There was an email sent to the cast with this announcement of the Season 3 pickup, and I was included,” Dowd told TheWrap. “Damon doesn’t do things that casually or carelessly, but I wondered if it was an error. I was kind of stunned.”

Lindelof assured her it was not a mistake, but did not envision using Dowd until late in the game.

[Warning: Spoilers ahead for Episode 7]

Patti appears in a compelling collection of scenes similar to her Season 2 exit. It’s a place in-between life and death, where Kevin has traveled once before, the place where he “unstuck” Patti’s spirit from his own and effectively sent her to the other side (we might call it the afterlife, but “The Leftovers” has never had any answers to that effect).

You see, back on earth, Kevin has succumbed to the driving theory perpetuating Season 3: that his miraculous survival of numerous near-death experiences makes him a Christ-like figure… or, in fact, the second coming of Jesus Christ.

In a totally normal turn of events, Kevin Jr. agrees to be strapped to a see-saw and submerged into water with a block on his chest to effectively die and visit the other side once more. He agrees not only to prove the group’s theory, but also to seek out loved ones who’ve died or disappeared in the “Great Departure” and carry them messages for the living.

This is how people spend their time in the world of “The Leftovers.” And this is where Dowd and Theroux meet again in a glossy and treacherous action sequence.

In this new place, Theroux’s Kevin is the President of the United States. In the midst of a stump speech, a national security crisis pulls him away to a highly-secured bunker. Only he can access the fortress-like space, and only in a highly specific way — a penile scan, to ensure his identity (have fun with that one this fall, media theory and gender studies classes).

Once inside, Kevin finds Patti donning her signature color white, but done up as a steely and glamorous National Security Advisor. She informs the president he must initiate an apocalyptic nuclear attack, and the metaphors start coming and don’t stop. An identical twin brother to Kevin surfaces. So does Liv Tyler’s character Meg Abbott (who herself was blown to bits by a drone strike in the world of the living, in the season opener).

The events are open to interpretation, but here’s what Dowd took away:

“[The nuclear airstrike] metaphor is very specific in, ‘What we’re going to blow up, Kevin, is your need and desire to hide from your life. What were going to blow up here is your ability to step back and protect yourself,'” said Dowd.

Theroux has had two love interests in the series, both formidable in character and performance via Carrie Coon and Amy Brenneman, but Dowd said the real love story is between Kevin and Patti.

“When two souls are completely familiar with the fears at their core of each of them, with nothing hiding it, there’s a kind of intimacy and trust there. It’s a very rare thing when they see each other in their greatest fear and their greatest loneliness,” Dowd concluded.

“To be seen and understood is a massive thing, and it allows a person to move forward. They provide each other with that,” she said.

The series finale of “The Leftovers” airs Sunday June 4, on HBO.