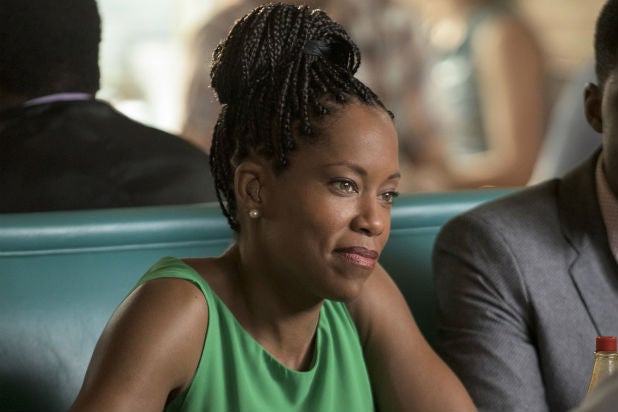 For the second season of HBO’s “The Leftovers,” Justin Theroux and Carrie Coon. pull up stakes from New Jersey and relocate to a Texas town where no locals vanished into thin air along with 2 percent of the global population.

But the troubles won’t go away for Theroux’s Kevin Garvey and Coon’s Nora Durst in Miracle, Texas, where Regina King‘s next-door neighbor, Erika Murphy, proves to be just as mysterious — and unmiraculous.

The Murphys, naturally, have secrets, lies and intensity to spare. TheWrap caught up with King to discuss Sunday’s episode, “Orange Sticker,” and her recent historic Emmy win for her other limited-run series, ABC’s “American Crime.”

You’re a busy lady! Congratulations on all the recent success.
You know, at the end of the day, you’re just grateful because you’re working. I’m at my best when I’m working, so things are groovy right now.

Before we get into “The Leftovers,” I’m curious about the reception from the Emmys. Not one but three African American actresses took home trophies.
It was an amazing night for everybody. The history being made with Viola Davis, myself and Uzo Aduba [winning]. It was a win for us, women of color, African Americans, for the arts. For everybody!

“The Leftovers” was a really interesting choice for you, because you’ve done quite a bit like this in your career, including five seasons on TNT’s “Southland” as well as “American Crime.” But nothing quite like this.
Well, Damon Lindelof and Warner Bros. came to me, so for that I’m lucky. I think we know I’m a fan of provocative, “make you think” dramas.

This season is a much more energetic take on the end of days, right?
Oh, God, it’s a huge visual difference. The first season in Mapleton, New Jersey, was shot in blues and grays. It was much cooler. When you got here to the South, things got more colorful — no pun intended.

It’s an obvious question, but do you get clued in on the mystery ahead of time? Are you learning with each script?
With Damon, he very purposefully keeps you in the dark across the map. There’s a scene in this week’s episode, when Erika is removing a bullet from her husband’s side. That scene that was so attractive in playing Erika. What happens has nothing to do with their family being black. The Murphys just happen to be a black family. She just happens to be going deaf. The show is a great study of society in that way. And also, I’m on set right now of “American Crime” for season 2. And both shows have a very risky feel to them.

You and Kevin Carroll [who plays Erika’s husband, John Murphy] have wonderful chemistry. There’s a lot between them that could have them at one another’s throat, but somehow these issues seem to fortify them.
I think they’ve known each other for most of their lives. When you’re in a town that small, it’s easy for your husband to be someone you grew up with. There’s a familiarity that is like no other in each of their lives. But a distance that has come with both of them growing apart, because John was in prison for a few years.

How do you decompress? It’s a lot of heavy work.
Believe it or not, I laugh a lot. I do enjoy life. Anything from being with friends, family, working out — I don’t necessarily love working out, but I like to move my body. Anything that encourages that.