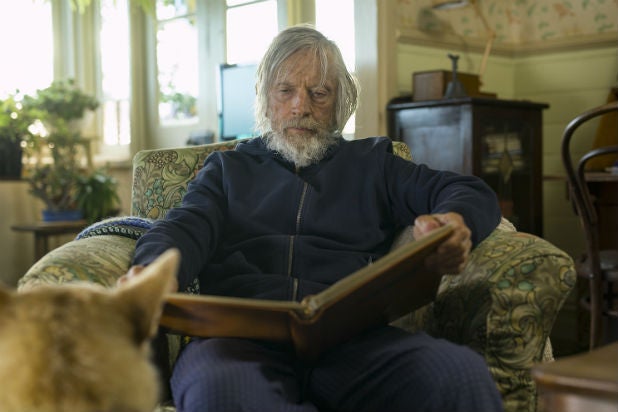 Sunday marks the fourth episode in the final season of HBO’s “The Leftovers,” and milestones are important to mark — take it from star Scott Glenn, who last week delivered the longest speech ever written by the show’s creator, Damon Lindelof.

“Damon called me and said, ‘I’m writing the longest monologue of my career,'” Glenn recalled during a recent chat with TheWrap.

Glenn returns after a single appearance in the second season, a time when the series’ fate was not yet decided. HBO and the creative team eventually agreed to end with a third, eight-episode run. They also (wisely) decided to revisit Glenn’s character Kevin Garvey Sr.

Garvey Sr. was the former police chief of Mapleton, New York, where “The Leftovers” began with the troubling premise that 2 percent of the world’s population had vanished with no explanation.

Glenn plays father to the show’s arguable protagonist Justin Theroux and, as the elder Garvey, was relegated to a psych ward for much of the first season thanks to a chorus of voices only he could hear, ones that often gave him orders.

“My [direction] on the voices was never a matter of if they were real or imagined. All Damon ever said was, ‘They never, ever lie. They never tell you anything but the truth, and then they disappear,'” Glenn said.

“The Leftovers” is lousy with that sort of ambiguity, which makes it so compelling — there is enough in the affirmative to keep the action going, but never any answers of substance.

Last week saw Garvey Sr. head to Australia, where he is busy traveling a spiritual Aboriginal map looking for pieces of music from each tribe. He believes, when sung as one piece, the music will prevent a forthcoming apocalypse that manifests in the form of a flood.

“In doing this, I found the best thing that I could do is dive into it and play the whole thing with complete personal believability,” Glenn said of the episode, directed by show EP Mimi Leder. “I made it my focus to come to work and say to myself, ‘Scott, your job today is to not get in the way of what’s supposed to happen.'”

In that beast of a Lindelof monologue (seven pages by Glenn’s count), the actor sits before an elder tribesman named Christopher Sunday — one who holds the last piece of the song Garvey Sr. needs to save the world. Glenn gives a brilliant, wrenching explanation of the signs that led him to that moment. One that also gave him the undertaking of saving the world.

But lest we forget, in the reality of this show, many folks believe the world has already ended. The worthy ones have departed and the rest are, well, leftovers.

“If the show works at its highest level, it will hopefully inspire each member of the audience to ask themselves [two questions],” Glenn said. “One, what does it mean when you see the word ‘family’? Two, what is the origin of religion? What is it that makes or propels us to have a purpose greater than myself?” he said.

Much of Garvey Sr.’s work in episode three sets the table for Sunday’s halfway point, and into the final four.

Pay close attention. If “The Leftovers” teaches anything, it’s that everything comes to an end.