“From the author of ‘Joa tagline that no studio would use to promote a movie, but “The Legend of Tarzan” — another dive into the pulpy output of writer Edgar Rice Burroughs — feels like another perfunctory attempt to breathe new life into a familiar property.

There’s never a moment in this new film that comes off like anyone involved was driven or aching to put a new spin on Tarzan; instead, it’s a reflection of public awareness of the character, whose name gets a little registered trademark symbol in the opening and closing credits. If marketing-based decisions didn’t sometimes lead to entertaining movies, Hollywood would be a ghost town, but here we have talented people on both sides of the camera still creating a movie that’s painfully rote.

Screenwriters Adam Cozad (“Jack Ryan: Shadow Recruit”) and Craig Brewer (“Hustle & Flow”) follow the formula of the recent “Alice in Wonderland” movies, setting the story after the action we know from the books while also indulging in enough flashbacks to make half of the film an origin story. Tarzan (Alexander Skarsgård) has returned to England to assume his title of the fifth earl of Greystoke, but U.S. government agent George Washington Williams (Samuel L. Jackson) compels him to travel to Africa on the invitation of the king of Belgium, who has sunk vast amounts of money into exploiting the resources of the Congo. 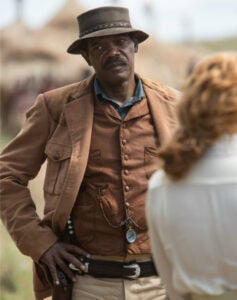 That invitation, however, is a trap – the king’s representative Captain Rom (Christoph Waltz) has made a deal that will earn his sovereign a fortune in diamonds, but only in return for delivering Tarzan to his enemy, Chief Mbonga (Djimon Hounsou). Williams wants to prove that Belgium is enslaving the local populace, so Tarzan agrees to go, as does his wife, Jane (Margot Robbie), who also grew up in Africa.

The plotting of this new film from director David Yates (the man behind the last four “Harry Potter” films) offers about as much surprise as Waltz’s villainous performance; you’ve seen this all before, and you know exactly where it’s going. Familiarity can be fun when there are other distractions to be enjoyed, but apart from a few rousing scenes — Tarzan and Williams make their way across a tree so huge that you can run on the branches, a kidnapped Jane eludes both her captors and a hungry, hungry hippo — “The Legend of Tarzan” never really pops.

Like “Johd “The Lone Ranger” before it, this movie packs in so much generic derring-do that there’s little time to focus on what made the character so memorable in the first place. And on the heels of this year’s “Jungle Book” remake, the wild-animal CGI falls a little short as well. (Let’s not even dig into the film’s racial undertones or white-savior story, much less the suggestion that the only way to stop a bad colonizer is with a good colonizer.)

Yates doesn’t serve his cast well: Skarsgård doesn’t have the literal animal magnetism you’d expect (although his torso reveals that His Lordship remained active back in England), Robbie is stuck playing an idea of a character rather than a character and even Jackson is relegated to breathlessly trying to keep up with his fellow good guys. (And wouldn’t a black American of the 19th century have some kind of response, good or bad, about going to Africa for the first time? The movie seems too timid to ask.)

“The Legend of Tarzan” isn’t as singularly joyless as many of this summer’s other current offerings, but it also feels distinctly like a missed opportunity. Even when Skarsgård offers up the character’s famous jungle cry, it sounds more mournful than enthusiastic, and that sentiment seeps into the entire enterprise.

From ”The Dark Knight“ to ”Jurassic World,“ these summer releases all topped the domestic and foreign box office, according to BoxOfficeMojo