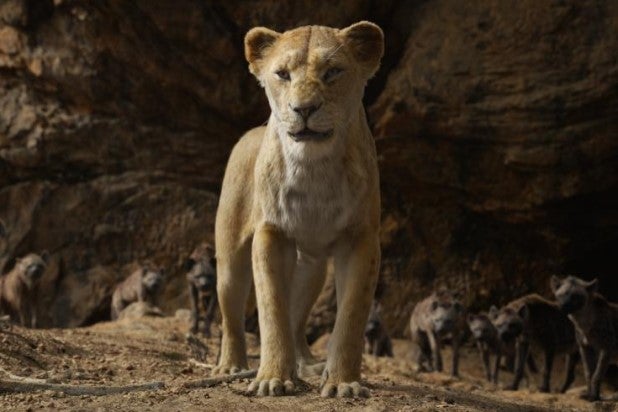 “The Lion King,” the Disney “live-action” remake that is made up almost entirely of computer-generated characters and backgrounds, has won three awards at the Visual Effects Society’s 18th annual VES Awards, which were handed out Wednesday night in Los Angeles.

The film won for its virtual cinematography and created environment, and also took the award for Outstanding Visual Effects in a Photoreal Feature, the VES category that corresponds most closely to the Academy Awards’ Best Visual Effects category.

“The Irishman,” with its extensive use of de-aging technology, won two awards, including Outstanding Supporting Effects in a Photoreal Feature. “Missing Link” was the top animated feature with two awards.

In the television categories, “Stranger Things” and “Game of Thrones” each received a pair of awards. So did “The Mandalorian” — including one for “The Child,” the episode built around the year’s most viral CG character, Baby Yoda.

Oscar nominees in the category this year include the two top VES winners, “The Lion King” and “The Irishman,” as well as “Star Wars: The Rise of Skywalker,” which won one VES award, and “Avengers: Endgame” and “1917,” which did not win any.

Also at the show, Sheena Duggal received the VES Award for Creative Excellence, Roland Emmerich was given the Visionary Award and Martin Scorsese received the Lifetime Achievement Award. Scorsese could not attend and accepted the award via video.

The show took place at the Beverly Hilton and was hosted by Patton Oswalt.

Outstanding Special (Practical) Effects in a Photoreal or Animated Project: “The Dark Crystal: The Age of Resistance”: “She Knows All the Secrets”
Sean Mathiesen
Jon Savage
Toby Froud
Phil Harvey