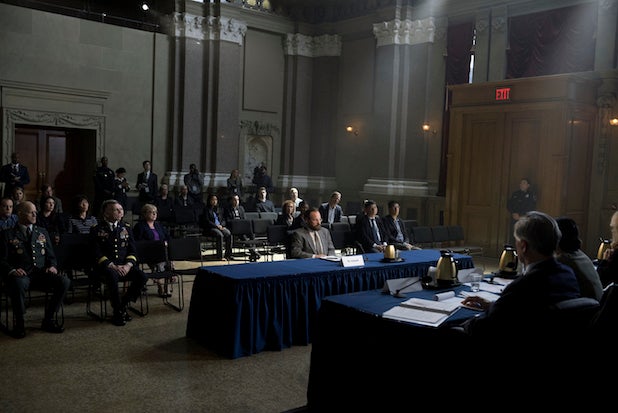 Hulu’s new series “The Looming Tower” takes a look at the events that led to the 9/11 attack on the Twin Towers — and the divisions between intelligence agencies that enabled it to happen.

Actress Wrenn Schmidt, who plays CIA analyst Diane Marsh on the drama, recently told TheWrap that the show asks the question: “Was history possibly changed because two people didn’t get along with each other?”

Lawrence Wright, the author of the non-fiction book “The Looming Tower: Al-Qaeda and the Road to 9/11,” on which the show is based, says the answer to Schmidt’s question is yes.

“What we show is that the rivalry between the two main arms of our intelligence community, the FBI and the CIA, stopped us from being able to stop the plot to attack to United States,” Wright told TheWrap. “We might well have done so had the CIA and the FBI cooperated with each other. But they did not, and the attack proceeded,” added the writer, who is also an executive producer on the series.

Wright said that the years before 9/11 were a particularly divided time for our country: “We’re talking about the Clinton years, when he was being impeached. It was a time of enormous partisan division. But we’re at a similar pass right now, and we’re, as a country, very distracted. I think that that is a dangerous resonance with the era that we’re depicting in the series.”

That political division has cropped back up, and seems worse than ever, Wright argued. “When 9/11 came along, for most Americans it came out of the blue,” he said. “[But] our interests had been under attack for years.”

“The Looming Tower,” starring Jeff Daniels and Peter Sarsgaard, begins its story with the attacks on the United States Embassies in Africa in 1998. The bombing of the USS Cole happened not long after, in October 2000. “That was at the height of the presidential campaign, but there wasn’t a single question raised about terrorism,” Wright said.

At the time, Americans did not feel feel threatened “because terrorism was something that happened elsewhere to other people,” said the author, adding, “I think that sense of complacency has returned. And it concerns me.”

The deep political divisions under Trump’s presidency could have “terrible consequences,” he said. “The consequences are dangerous to our country, and not just to our civic life but to our safety. And the attacks on the intelligence community for partisan reasons are a threat to our safety.”

Wright added bluntly: “Terrorism is a part of our lives whether we like it or not.”

Schmidt echoed Wright’s concerns: “Ultimately, it’d be best for all of us if there was some way those two parties could work together.”

Wright said that he and the other producers wanted to show “two levels of this division”: institutional and personal.

“The FBI and the CIA have different mandates. The FBI’s mission is to arrest people and put them on trial. And the CIA’s mission is to gather intelligence, and to find out what’s going on and what might happen in the future. And sometimes these missions are at odds with each other,” Wright said. “That engenders a kind of a personal rivalry embodied between John O’Neil [Daniels] and Martin Schmidt [Sarsgaard]… These are very flawed individuals entrusted with our safety. And we have to acknowledge that human institutions are inherently flawed.”

The drama portrays Daniels and Sarsgaard’s characters — bosses in the FBI and CIA, respectively — as opposing forces with conflicting objectives. They can barely stay in the same room long enough for a meeting (and the rest you’ll have to watch for yourself).

Wright is also the author of “Going Clear,” which inspired the 2015 HBO documentary (which he co-produced) that exposed questionable practices within Scientology. He is a staff writer for The New Yorker and has written the novel, “God’s Favorite,” along with eight non-fiction books. His one-man play, “My Trip to Al-Qaeda,” was turned into an HBO documentary by Alex Gibney.