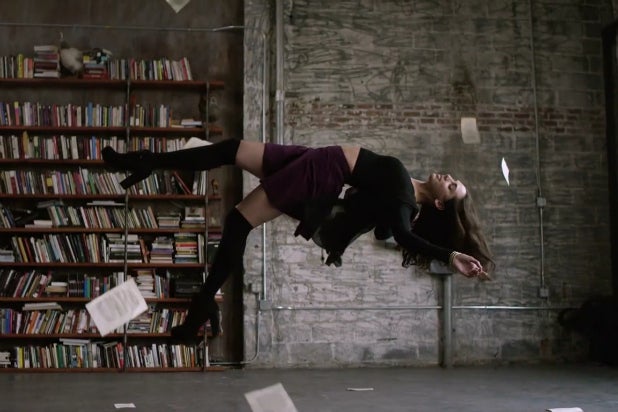 Imagine a horny Hogwarts and you’re on the wavelength of “The Magicians,” a somewhat intriguing, occasionally diverting, mostly just silly and campy adaptation of Lev Grossman’s 2009 fantasy novel. This Syfy series about a top-secret academy for prestidigitators-in-training would seem well-suited to viewers who love “Harry Potter,” “Divergent,” “The Hunger Games” and any other franchise in which young, attractive people must test their mettle through extraordinary, dangerous means. After only one episode, it would take a clairvoyant to know whether “The Magicians” will eventually develop into an agreeably dark and twisty piece of juicy genre fare, but at this early stage its future looks murky.

The show stars Jason Ralph as Quentin Coldwater, a man in his early 20s whose personality isn’t as evocative as his name: He’s a bit of a genius loner, preferring to reread a series of beloved childhood fantasy novels (known as the “Fillory and Further” books) than get on with his life. But one day, he finds himself inexplicably transported to Brakebills, a school for people with magical powers. His best friend Julia (Stella Maeve) is also invited, but unlike Quentin she doesn’t pass an entrance exam administered by the university’s stoic dean (Rick Worthy) and is sent back to the regular world with her memory erased, except she manages to remember her brief time at Brakebills.

The hour-long pilot, directed by feature filmmaker Mike Cahill (“Another Earth”), sets about achieving two goals: introducing the series’ milieu and characters; and establishing a pulpy, tawdry tone that aims for viewers’ guilty-pleasure zone. Sex, snark and intrigue are on the menu for “The Magicians” as Quentin and his fellow students develop their skills while learning that the “Fillory and Further” books aren’t entirely fictional but, instead, provide clues to these characters’ incredible new reality.

This is a lot to juggle in only one episode, and the best that can be said about “The Magicians” thus far is that it has so many balls in the air that you’re tempted to stick with it just to see where it’s going. (The pilot even introduces what figures to be a major subplot: While Quentin navigates Brakebills, Julia, who is crushed about being rejected, is seduced by a shadowy figure who appears to be part of a rival academy.)

Even then, though, the show puts more stock in atmosphere and attitude than in distinguishing its characters or sci-fi fantasy terrain from those of comparable projects. “The Magicians” seems comfortable painting within the margins of YA fiction that came before, but considering that those movie adaptations had bigger budgets and more compelling stars than Syfy can offer, the show ends up feeling like a low-rent variation on better (or, at the very least, earlier) incarnations of the same coming-of-age-with-special-effects melodrama.

The familiarity extends to Quentin, who so far doesn’t seem that different than other brooding-but-brilliant protagonists in search of a purpose. (We aren’t told in the pilot explicitly that he’s “the one,” but that seems to be a safe assumption.) Ralph gives the character an appealing vulnerability, but he’s awfully blank at the center of this story, and pilot writers John McNamara and Sera Gamble don’t provide him with much dialogue that crackles. (At this early stage, “The Magicians” lets him be the straight man amidst the academy’s colorful, bitchy, flamboyant supporting players, especially Hale Appleman as a condescending fellow student whose every line reading is practically delivered with a curled lip and a raised eyebrow.

Also Read: 'Haven' Sneak Peek: Nathan Gets a Blast From the Past (Exclusive Video)

With Quentin as our hero, there’s not a lot in “The Magicians” to encourage us to follow along on this journey. That said, the pilot does end with a nasty little surprise involving the death of a character we might have assumed would be central to the series. The twist suggests the darker forces hovering at the outskirts of Brakebills that may threaten Quentin, but so far the character’s greatest challenge appears to be that he’s stuck in a thoroughly ho-hum adventure.

Syfy will present the first epsisode of The Magicians as a sneak preview Wednesday at 10 p.m. EST.