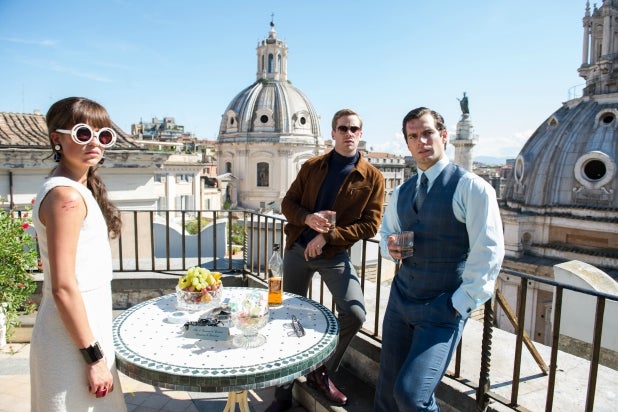 After giving us two steampunk-flavored reboots of Sherlock Holmes, director Guy Ritchie has aimed the Wayback Machine to the Golden Age of Kennedy, Khrushchev and, perhaps most importantly, Ian Fleming with “The Man from U.N.C.L.E.,” based on the 1964-1968 TV show. The Cold War got sexier after the release of the first big-screen 007 adventure, “Dr. No,” and Ritchie’s new movie, set in the early ’60s, harkens back to a time when pop culture had spies, gadgets and deadly dames behind every dust jacket and on every screen, large and small.

This new “Man from U.N.C.L.E.” would be an instant masterpiece if it were consistently as good as its best parts, but even as a hit-and-miss affair, it’s a bracing bit of late-summer fun for anyone who has given up the notion of a major studio offering anything truly revelatory until at least October. Ritchie trusts the material, the settings and the actors enough to calm down his hyperactive camera and to find the fun in analog espionage.

The next day, Solo and Kuryakin are none too pleased that they will be forced to work together, as they and Gaby insinuate themselves into the social circles of Italian industrialists Alexander (Luca Calvani) and Victoria Vinciguerra (Elizabeth Debicki, “The Great Gatsby”), who are suspected of working with Gaby’s Uncle Rudi (Sylvester Groth, “Inglorious Basterds”) on a rogue nuke that both the U.S. and the USSR want to apprehend. And if Solo and Kuryakin have to kill each other to deliver Gaby’s father’s plutonium-enriching formula to their respective home governments, well, that’s the spy game.

(For those of you playing Accent Bingo at home: That’s a Brit playing an American, an American playing a Russian, a Swede playing a German, and an Australian playing an Italian, and we haven’t even mentioned the Irish-Welsh Jared Harris playing Solo’s American boss. Rest assured that Hugh Grant plays spymaster Alexander Waverly as British and not Dutch or Kiwi.)

The plot (by Ritchie and frequent collaborator Lionel Wigram) offers the typical twists and reversals you’d expect from any spy movie (or any episode of “The Man from U.N.C.L.E.,” for that matter) but with brisk pacing, and a cast this attractive parading the kinds of fashions that will remind you how much you miss “Mad Men,” most of the movie boasts a Mod crispness.

Ritchie’s sense of humor in moments of strife and violence remains very much a personal taste: I found it hilarious when Solo manages to sit casually and enjoy a snack while Kuryakin finds himself stuck in a dangerous speedboat chase, but there’s an accidental immolation that the movie wants to treat like a joke that feels too harsh for both the period and the tone established by the rest of the film.

(There’s also some hand-to-hand-combat-as-foreplay between Gaby and Kuryakin that would have been more fun had it not taken place off camera.)

Ultimately, the actors find the right balance between committing to the material and acknowledging that none of this is to be taken too seriously, and the steady parade of 1960s hats and high-tech and Euro-pop singles makes “The Man from U.N.C.L.E.” a breezy cinematic distraction that never pretends to go any deeper than its television roots.