Since it was first published in 1976 by author Walter Tevis, “The Man Who Fell to Earth” has always been a cautionary sci-fi tale about Earth’s dwindling resources and humanity’s distraction by media and vice. This is true of the 1976 Nicolas Roeg feature film adaptation starring David Bowie, and also of the new Showtime series which expands on the original story of the alien who comes to Earth in search of water for his dying planet. In the original narrative, Thomas Joseph Newton is from the planet Anthea and uses his advanced technology to create several inventions making him the richest man on Earth. The new series, created by showrunner and co-executive producer Alex Kurtzman (“Star Trek: Discovery”) and co-executive producer and writer Jenny Lumet (“Clarice”), take us on a similar journey.

This time, K. Faraday (Chiwetel Ejiofor) is the Anthean visitor in search of Newton (Bill Nighy) and is reluctantly aided by former scientist Justin Falls (Naomie Harris) and legal analyst Hatch Flood (Rob Delaney). The series serves as a pseudo-sequel to Roeg’s film, taking us on an emotional journey that tips its hat to Tevis while sprinkling Ziggy Stardust glitter along the way.

Although the press was only provided with the first four episodes to review, we can confirm that every episode shares a title with a David Bowie song. The premiere, “Hallo Spaceboy,” begins with a flash-forward to a confident, commanding K. Faraday (Ejiofor). He is a successful inventor and orator who explains to his adoring fans that no, he is not from this planet, and yes, he has a story to tell. 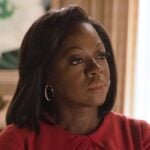 Also Read:
‘The First Lady’ Review: Showtime Anthology Puts the Spotlight on the Women Behind the Men

We witness his ship crash on Earth and how he adapts his body into human form, walking about naked, Terminator-style, searching for something. He is arrested and given a dead man’s clothes after cops find him with four feet of garden hose down his throat, having a drink of water.

He has four stomachs and stays thirsty.

Justin Falls (Harris) is called to retrieve him because hers is the only name he knows. Having no idea who he is, she looks at him and leaves him at the precinct. The pair won’t meet again until Falls sees him on the road being mugged and intervenes.

He almost shoots her by mistake.

Alternately misunderstanding while being misunderstood defines the nature of the pair’s relationship throughout the show as they stumble along on a journey to save their respective planets.

Harris flexes in her role as Justin Falls. A mom, caregiver, and former nuclear fusion scientist, she’s caught in the web of healthcare sanctioned poverty. Forced to pay a drug dealer to get her father’s pain medication, she’s cleaning up biowaste to make ends meet when Faraday appears like an awkward miracle, money in hand in need of her help.

Masterfully, Ejiofor flips the “alien trying to be human” trope on its head. Instead, he instills Faraday with a sense of agency. He’s a whole being when he arrives. Faraday is an immigrant of sorts, taking on a local name and trying his best to understand Earth’s languages and cultures to send help back to his family.

One of the most beautiful scenes in the series so far is when Faraday listens to a “song message” through the same type of instrument that Bowie used in Roeg’s film. Both Nighy and Ejiofor share the screen as Faraday empathically shares the emotions of Newton’s love and the loss of his wife. It’s the first time the alien is experiencing human emotion, and Ejiofor’s transformation onscreen is palpable.

Stuck on Earth for 40 years, unable to return, Bill Nighy’s Newton has had all of his patents stolen from him except for the elusive “10th patent”, which unlocks the secrets to fusion power that could save both Anthea and Earth and let him return home. Unfortunately, the crew needs to get past both sinister CIA Agent Spencer Clay (Jimmie Simpson) and Floods’ sister Edie, the Elizabeth Holmes-inspired owner of Origin Industries, who now owns the patent, to get it.

Cleverly placed easter eggs honor the previous work. For example, reminiscent of Bowie’s bathroom skin peeling scene, Nighy’s Newton has his human face forcibly peeled away by scientists. Like Newton, Faraday trades gold for legal tender – but only after purging about a pound of gold rings on the sidewalk outside a Pawn Shop. (A scene which isn’t as strange as it sounds after you witness Faraday regularly vomit up items he needs at intervals, like a cat with a swiss army hairball).

Ultimately, “The Man Who the Earth” is a redemption story. Each character tries to retrieve something they’ve lost while pulled forward into the unknown. Deliberately paced and full of beautiful moments of raw humanity, like Faraday, the series never hides what it is. And it’s that honesty that makes it so relatable. Even if you are unfamiliar with the previous work, the concepts of environmental crisis, the threat of war, and the grief of losing a loved one are universal. The first four episodes pull a thread on an unraveling mystery that we can only hope is as beautiful and thought-provoking as the start.

“The Man Who Fell to Earth” premieres Sunday, April 24 on Showtime with new episodes rolling out weekly.