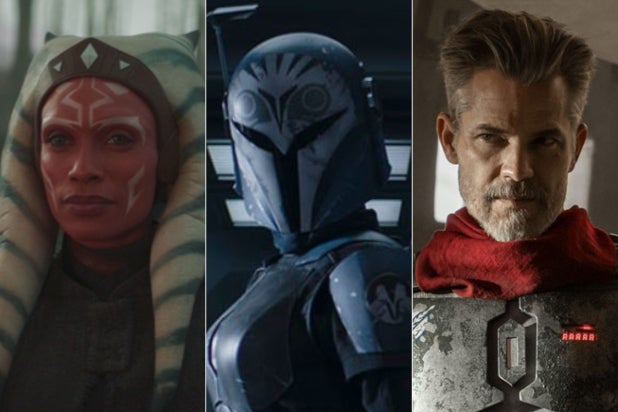 “The Mandalorian” gave die-hard “Star Wars” fans across galaxies both near and far, far away a Black Friday present: Rosario Dawson’s debut as the dual lightsaber-wielding Jedi Knight Ahsoka Tano. But more casual viewers were probably left asking, “Who?”

Tano isn’t the only one who had hardcore fans celebrating and everyone else scratching their heads. The second season of Jon Favreau’s Disney+ series has featured several nods and appearances to characters who are part of the vast “Expanded Universe” of “Star Wars” tie-in novels and TV series.

And that’s why we’re here: to give you a rundown of who’s who, their place within the “Star Wars” galaxy and why they’re important. It goes without saying, but if you haven’t seen the latest “Mandalorian” episode (or any of them), steer clear of the spoilers below.

For starters, we’ll give you a brief explainer of just what the “Expanded Universe” is. In short, it’s a series of tie-in novels and TV series that, yes, expand the world of “Star Wars” past the Skywalker family, the Empire, the Jedi and the Sith.

After Disney bought LucasFilm in 2012, they rebranded the Expanded Universe as “Star Wars Legends” and declared they were non-canon. Only the films and the animated “Star Wars: The Clone Wars” — Disney revived the Cartoon Network series for a final season on Disney+ earlier this year — and “Star Wars Rebels” (which debuted after Disney’s purchase) are considered canon. However, new stories like “The Mandalorian” are clearly drawing from “Star Wars Legends” material.

After being name-dropped in an earlier episode, Dawson made her debut as Ahsoka Tano in the opening minutes of Friday’s episode, aptly titled “The Jedi.”

She’s arguably the most famous Jedi Knight you’ve never heard of. Tano first appeared in the 2013 animated “Star Wars: The Clone Wars” film and the TV series that followed. She was the Padawan of none other than Anakin Skywalker, and fought by his and Obi-Wan Kenobi’s sides during the Clone Wars, which took place between “Attack of the Clones” and “Revenge of the Sith.” She also had own self-titled novel.

Tano and Anakin developed a close father-daughter relationship — which made it all the more heartbreaking when Anakin turned to the Dark Side, sending Tano into hiding while the rest of the Jedi Knights were slaughtered in “Revenge of the Sith” (the infamous Order 66). She reappeared in another animated series, “Star Wars Rebels,” which took place in the years between “Revenge of the Sith” and “A New Hope.”

Ahsoka Tano was believed to have died in “Rebels,” though Dave Filoni, who created both “Clone Wars” and “Rebels” and serves as an executive producer on “The Mandalorian,” said her fate was purposely left ambiguous. Her voice was briefly heard by Rey in “Rise of Skywalker” as part of a group of dead Jedi, including Luke and Obi-Wan, who helped Rey defeat Emperor Palpatine. Ashley Eckstein voiced the character in all her prior appearances.

Like Ahsoka Tano, Bo-Katan was a key player in both “Clone Wars” and “Rebels.”

Her full name is Bo-Katan Kryze and, like Din Djarin (Pedro Pascal’s title character), she’s a Mandalorian. Unlike Djarin, however, she’s totally cool with taking her helmet off. She was the leader of the Nite Owls, a Mandalorian group of elite female fighters, and later joined the Death Watch, a terrorist splinter group of Mandalorian warriors.

Bo-Katan is best known for her battles against Darth Maul (who was revived after he died in “A Phantom Menace”) to rid her home planet of Mandalore against the Empire’s occupation. She is also a major ally of Tano’s, and is the one who told Djarin to take The Child (Baby Yoda, er… Grogu) to her. Bo-Katan was assumed dead at the end of “Star Wars: Rebels” when she lost the Darksaber that’s now in the hands of Moff Gideon (Giancarlo Esposito).

For Sackoff, this one was doubly special: She also lent her voice to Bo-Katan in both earlier series.

Also Read: For a Hefty Price, You Can Also Share Baby Yoda's Macarons

This one is more of a deep cut, as Vanth had never before appeared on screen. A minor character, Cobb Vanth was introduced in Chuck Wendig’s novel series “Star Wars: Aftermath,” which takes place in the years following “Return of the Jedi.” Vanth becomes the Marshall of Freetown on Tatoonie and sports the armor of Boba Fett.  Throughout the three novels, Vanth battles the Tusken Raiders and a krayt dragon, which he finally vanquishes with help from Djarin in “The Mandalorian” Season 2 premiere, in exchange for his Boba Fett armor.

We’re cheating a bit here since Thrawn hasn’t actually showed up yet, but he was name-dropped by Tano in Friday’s episode, teasing his eventual live-action debut. Thrawn was first introduced in the 1991 novel “Heir to the Empire” and took over the Empire’s forces in the years after their defeat in “Return of the Jedi.” He also faces off against Luke, Princess Leia, Han Solo and the other main heroes in his own self-titled novel trilogy. He’s later thought to be defeated after his appearance in “Star Wars Rebels,” though “The Mandalorian” hints that’s not the case.