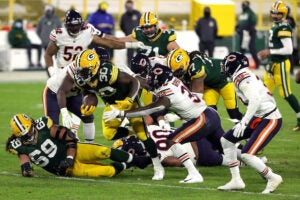 The return of Disney+’s “The Mandalorian” notched the streaming service’s highest-ranking on Nielsen’s Top 10 streaming programs, landing at No. 3 for its second season premiere weekend.

However, Netflix still had the other nine slots, with “The Queen’s Gambit” reigning over the list in its first full week since it’s Oct. 23 premiere. NBC comedy “The Office” landed at No. 2, while Christmas movie “Holidate” debuted at No. 5.

Also Read: How 'The Mandalorian' Brought the 'Star Wars' Extended Universe to Life

For Disney+, it’s only the second time the streaming service has appeared on Nielsen’s weekly list. In September, “Mulan” had a one-week run on the list.

Currently, the Nielsen panel reports minutes viewed on Amazon Prime, Disney+, Hulu, and Netflix. Given that “The Mandalorian” will stream new episodes through Dec. 18, plus the upcoming debuts of Pixar movie “Soul” (Dec. 25) and the first Marvel Studios series “WandaVision” (Jan. 15), expect to see Disney+ make more of a permanent home on this list.

25 Hilarious Blunders in Movies and Shows, From 'Back to the Future' to 'American Sniper' (Photos)

Sometimes, random cameramen make it into a shot or a cast member's hair grows three inches from one scene to the next. Here are some hilarious blunders in films and TV shows that prove human knowledge doesn't necessarily grow with new technology.