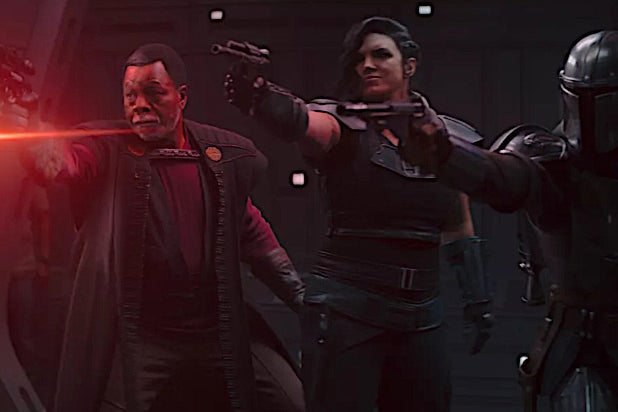 The latest episode of “The Mandalorian” had an easy-to-miss goof — a crew member in a shirt and jeans can be spotted in one shot trying to hide behind Carl Weathers during a battle scene.

If you have Disney+, fast forward this week’s episode to around 18:54, as Mando opens fire alongside Greef Karga — played by Weathers, who directed this episode — and Gina Carano’s Cara Dune. As you can see, if you hit pause — or just look at the image above — you can catch a crew member pressing himself against the wall, trying to hide behind Weathers in the shot. It’s a blink-and-you’ll-miss-it blooper, and the crew member is gone when the camera returns to the trio after a brief cutaway to the guards they are shooting at.

It’s an easy error to miss and apparently one that a lot of people at Disney and Lucasfilm didn’t see as the shot in question was used as a promotion image by Disney+ for the episode. It’s not quite as egregious as the infamous shot during the final season of “Game of Thrones” where a cup of coffee was left on a table next to Daenerys Targaryen, forcing HBO to edit the cup out on the streaming version of the episode.

“The Mandalorian” is halfway through its second season, with new episodes premiering on Disney+ every Friday through December 18.