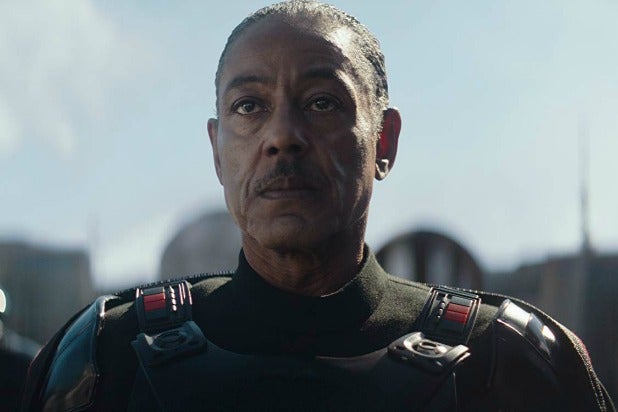 (This article contains all the spoilers for “Chapter 8,” the season 1 finale of the “Star Wars” TV series “The Mandalorian” on Disney Plus.)

If you were confused by the very end of the first season of “The Mandalorian,” it’s probably because you didn’t know or weren’t expecting that Disney would be folding the first ever live-action “Star Wars” TV series into a sort of mini-verse with the other “Star Wars” show.  Because, yeah, the final scene instead gave us the show’s first direct connection, via Moff Gideon, to the animated shows “Rebels” and “Clone Wars.”

So this episode was, of course, all about the Mandalorian (Pedro Pascal) and his friends trying to escape Moff Gideon and his legion of stormtroopers of various types. Baby Yoda takes a few lumps along the way, but they manage to eventually escape thanks to Mando’s new jetpack which he picks up on the way out of town. Our hero pulls quite a crazy move when Gideon, piloting a TIE Fighter, tries to take them out from the air.

The Mando rockets up into the air and manages to get on top of the fighter, riding it like a bucking bronco. Eventually he manages to attach a couple explosives to the hull and jumps off, with Gideon’s TIE Fighter crashing to the ground. And the Mandalorian heads off to try to find some Jedi to hand Baby Yoda over to.

This is a pretty obscure reference for everyone who didn’t watch the “Star Wars” cartoons, “Clone Wars” and “Rebels.” The Darksaber appeared in a handful of episodes of each show, and has a very long history. If you want the full history of this weapon, you should check out the Wookieepedia article about it — otherwise, I’ll give you the short version here.

By the time of the Clone Wars, the blade had fallen into the hands of Pre Vizsla, who led a rogue group of Mandalorians called the Death Watch who fought with the Separatists against the Republic. Darth Maul — who, yes, survived being cut in half in “The Phantom Menace — tired of Viszla’s shenanigans and power plays, challenged Viszla to a duel for ownership of the Darksaber and control of Death Watch, which he won. So Darth Maul used the Darksaber for a while, until he put it in storage on his home planet of Dathomir.

Years later during the events of “Rebels,” the Darksaber was nabbed by heroes Sabine Wren and Kanan Jarrus. Wren, herself a Mandalorian, learned to use the sword and wielded it in battle for a while, before eventually handing it over to Bo-Katan Kryze, another Mandalorian, about a year before the events of the original “Star Wars” film. And that was the last we heard about the Darksaber until Moff Gideon used it.

“The Mandalorian” takes place a few years after “Return of the Jedi,” so there’s probably seven or eight years between “Chapter 8” and when we last saw the Darksaber on “Rebels.” So we don’t know how Gideon ended up with it, but that’s a long time and anything could have happened since then. The fact that Gideon knew the Mando’s real name indicates he has had some run-ins with some other Mandalorians in the past, and it’s entirely possible that he killed Bo-Katan for it. But there’s no point in speculating further until we get more info.

Either way it’ll be interesting to see the Mando facing off against a personal enemy instead of just the random bad guys of the week the way most of his conflicts in Season 1 were. But it’s gonna be a long wait for Season 2.