In the early 1970s, I remember teachers passing out children’s current-events newspaper the Weekly Reader, with its articles that promised great domed cities on the bottom on the ocean and on the surface of the moon. Somewhere along the way, the promise of that great big beautiful tomorrow went away, while science itself became suspect among recalcitrant politicians who couldn’t publicly commit to believing in the theory of evolution or the destruction of the ozone layer lest they lose points among certain anti-intellectual segments of their base.

Superheroics are the prevailing dream being peddled by today’s movies, but there are limits to the aspirations they inspire: we can hope to be as brave as Batman or as resourceful as Iron Man, but none of us are ever going to become Asgardian deities or flying Kryptonians or talking trees.

See Video: 'The Martian' Trailer: Matt Damon Struggles to Survive While Stranded on the Red Planet

All of which brings me to “The Martian,” one of the most exciting film-going experiences I’ve had all year. It’s a movie that believes in humanity’s capacity to travel the universe, but it also cheerleads for the scientific know-how required to build a rocket or to calculate a trajectory or even to grow crops using astronaut poop. It’s a film that believes in people’s better instincts and the potential for our ability to create an exceptional future. (“Tomorrowland” tried to accomplish something similar, with less success.)

Perhaps most importantly, not only does the film stress the importance of using math and physics and botany and chemistry to solve problems, but it also makes a plot based on scientific inquiry and audacity just as exciting as and even more unpredictable than the movies’ usual brand of problem-solving, the kind that involves punching everyone and then blowing everything up.

And coming on the heels of “Exodus: Gods and Kings” — draw your own conclusions about “Prometheus” or even “The Counselor” — “The Martian” reinforces Ridley Scott‘s place as an accomplished storyteller, one who can focus on human-sized characters even against a backdrop as big as the Milky Way. 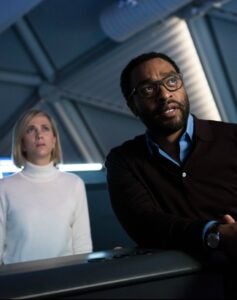 Matt Damon stars as Mark Watney, part of a team of astronauts on a manned mission to Mars. His team is forced off the planet by a sudden windstorm, during which a detached satellite dish knocks out Watney’s radio and drags him out of the others’ sight. Determining that he must be dead, Commander Lewis (Jessica Chastain) reluctantly decides to leave him behind in order to save the other crew members.

Watney, it is no spoiler to say, is not dead. Staggering back to the crew’s temporary compound, he must remove a chunk of antenna lodged in his sternum (good news for those who liked the self-surgery scene in “Prometheus”) before listing out all the reasons he’s doomed: he could run out of food or water, he could run out of oxygen, his quarters could depressurize.

Once he’s established what could kill him, Watney then begins to “science the shit out of” that list, devising ways to grow crops, create water from scratch and possibly even travel to a spot where the next Martian explorers are set to land in the next year or so. Lucky for him, NASA notices that something’s been moving the rovers and adjusting the buildings, and once people back on Earth – including scientist Chiwitel Ejiofor, administrator Jeff Daniels and flack Kristen Wiig – realize Watney’s alive, they go into overdrive, first re-establishing communication and then figuring out just how they might rescue him.

Adapting the novel by Andy Weir, Drew Goddard (“Cabin in the Woods,” Netflix’s “Daredevil”) very skillfully juggles suspense — you may feel you know how this movie ends, but the steps it takes to get there will come as a surprise — and humor; Watney records a video log long before he has a chance to talk to anyone back on Earth, and his sardonic good humor goes a long way in keeping both his spirits and the movie afloat. (Kudos to supervising music editor Tony Lewis and his team, who must have had a blast selecting the very specific genre songs that Commander Lewis left behind on Mars, much to Watney’s consternation.)

The results are less like “Gravity” — even though that film’s successful melding of prestige-picture awards baiting and large-format ticket prices paved the way for this one, as well as for “Everest” and “The Walk” — and more like “Apollo 13,” in which a seemingly insurmountable series of catastrophes is broken down into a set of discrete problems, each of which ultimately has a solution. (“The Martian” may or may not boost science in the eyes of today’s schoolchildren, but it definitely makes Jet Propulsion Labs seems like a really sexy place for smart wonks to work.)

This ranks among Damon’s finest work, allowing him to be both puckish and brainy amidst his travails, but the film is by no means a one-hander — Goddard and Scott surround him with fascinating support teams, whether it’s the folks at NASA or JPL or even Watney’s fellow Mars explorers (played by Chastain, Kate Mara, Michael Peña, Sebastian Stan and Askel Hennie), who remain crucial throughout.

“The Martian” is thrilling and amusing from start to finish — and it made my inner Weekly Reader subscriber dream anew about those cities on the moon.