Jesus taught his followers to turn the other cheek when struck by an enemy, but he never said anything about putting your opponent in a chokehold for the sake of your church. Despite the New Testament’s pacifistic edicts, violence and extreme sports are a selling point, if not a spiritual activity, for many congregations. Forget “Fight Club”: Boxers, bull riders, and MMA fighters now all have “fight churches” to call their own.

That crisis of religious masculinity — suffered by believers who don’t cotton to the Son of God’s hippie messaging — is the focus of “The Masked Saint,” a loose biopic of wrestler-turned-pastor-turned-wrestler-again Chris Whaley. Played by a trim, stiff, and miscast Brett Granstaff (who’s outweighed by Chris’ Goliathan archnemesis in the ring by at least a hundred pounds), the newbie minister plays a game of Goldilocks, trying on different guises of manliness like a luchador searching for the mask that expresses his truest self. One’s too meek, another too cocky. Chris gets closest to God when he’s lifting dumbbells with one hand while holding a book of spiritual advice in the other.

See Video: Anna Duggar Breaks Silence on Josh's 'Betrayal': 'My Only Hope Was to Cling to My Faith'

Turns out, you can be both macho and righteous, as long as you’re doing it for the Lord. Chris’ journey toward that revelation makes up this stretched-out parable, which boasts the kind of Lycra-deep characterization we associate with the religious-allegory genre. To illustrate its lessons, the narrative twists itself into stranger knots than the athletes on the wrestling mat, which is how Chris not only puts back on the white Spandex (his signature look as The Saint) after a premature retirement from the ring, but also becomes a masked vigilante in his failing church’s crime-filled neighborhood, knocking out pimps and robbers.

Granstaff and Scott Crowell’s script relies heavily on platitudes; Chris and his wife (Lara Jean Chorostecki) affirm that God never gives them more than they can handle at least three times to each other. “The greatest sermons are the lives we live,” Chris reads aloud — which unfortunately happens to be the screenplay’s guiding force, too.

Chris strives toward goodness, and his conversions of prostitutes, domestic abusers, and lapsed churchgoers just sorta happen. The film’s one genuinely compelling issue — What does a pastor do with a parishioner he dislikes for valid reasons? — simply dissolves thanks to Chris’ kindness. It’s like watching the world’s most boring magic trick. Even Jesus had the showmanship to feed thousands with five loaves and two fish. 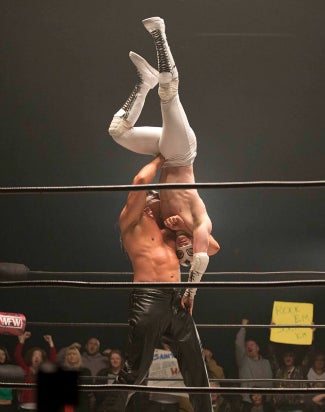 Director Warren P. Sonoda (“Swearnet: The Movie,” “Servitude,” “Textuality”) likewise squanders the talents of his supporting cast, which includes Diahann Carroll as Chris’ mentor in the church and WWE hall-of-famer Roddy Piper as an oily promoter in his last onscreen role. (He goes broad, but he’s fun to watch.) As for the wrestling scenes, Sonoda doesn’t feature enough of the hamminess that makes the sport such a spectacle. Only one goofy montage — when, say, The Saint body-slams his foes while kneeling in prayer — offers something to viewers already swept up in WrestleMania.

“The Masked Saint” didn’t screen for critics, but it’s no worse than any other faith-based film, which as a canon tends to sacrifice story for the sermon. A movie that can finally combine the two — now that’d be a miracle worth beholding.