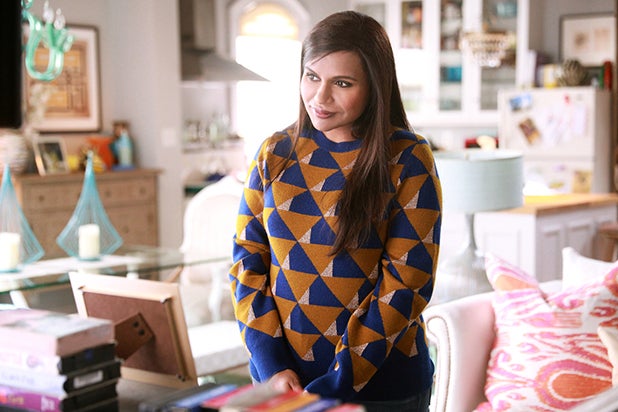 (Spoiler alert: Please do not read on if you haven’t seen the series finale of “The Mindy Project”)

And while the finale, which dropped on Hulu on Tuesday, definitely seemed like a carefully choreographed dance — much like the one the cast performed at Tamra (Xosha Roquemore) and Morgan’s (Ike Barinholtz) nuptials — Warburton says it was not a foregone conclusion from the beginning.

After all, Danny (Chris Messina) and Mindy (Kaling) getting back together in the final moments is pretty much a by-the-book romantic comedy trope — the episode is literally titled “It Had to Be You” — but not something that would have worked out even a season ago because of how much of a jerk Danny was at the time.

“No, [Kaling] always wanted to treat it like real life and we needed to see how stuff played out,” the long-time “Mindy Project” showrunner tells TheWrap. “We needed to see how the audience reacted to it and the characters are reacting realistically.”

“The toughest decision we had to make was to break them up as a couple in Season 4,” Warburton continued. “It was a big move. But I don’t think we would have lasted as long as we had if we hadn’t.”

Warburton said getting to see what Mindy’s life was like without Danny “gave us years more worth of stories to tell.”

So, whether or not you are a Mindy and Danny supporter, or someone who is railing about how Danny still doesn’t deserve his baby mama, rest assured, no one knew these two were endgame until, well, the end of the game.

“I would say that what we let the character do was, you know, find this guy they were sort of an awkward fit with, it fell apart, and she felt like, ‘OK, now I have a second chance to find the right guy,'” Waburton said. “And we as writers weren’t sure it was going to happen. We thought, ‘Maybe she will find someone else.'”

Warburton says that, while he, Kaling and the writers don’t let the audience dictate what they do, they do “listen” to the what the fans are saying.

“You just got this sense she was never going to find someone like Danny again,” Warburton said. “So the challenge was, this season we wanted the guy to be a good character. Because to fall back with a guy who treated her pretty badly would be weak of her. She’s proved to herself she has everything she wants in her life. And hopefully Danny has apologized enough and made up for his mistakes enough to the point where she can choose to be with him.”

When it comes to the sheer plot convenience of Danny’s mother, Annette (Rhea Pearlman), being diagnosed with cancer — a development that helped bring Danny back into Mindy’s life — Warburton says “if it wasn’t this, it would have been something else.”

“Two things needed to happen [for them to get back together],” Warburton said. “One, they needed a crisis in their family so they had more time than they usually had to spend together. And, for Danny to get a chance to see how well she’s been doing with her practice and that he was wrong. But the timing was convenient, because she was about to lose the practice. And if the fertility practice didn’t work out, then Danny may have felt like he was always right.”

If you still wanted things to work out different, don’t worry, Warburton says there a multiple “worlds” here, one in which Mindy is alone.

“I think our message was that she doesn’t need someone, but if she chooses to have someone, that’s OK,” Warburton said. “Like I said, you know these two have never had a smooth past, I don’t think they will post-episode either. But hopefully what we learn is, no matter what happens, she’s gonna be okay. This doesn’t have to be a fairytale ending. I can get out of this if it doesn’t work.”

That’s a pretty big step for a woman who owns a VHS copy of “The Princess Bride” to take.