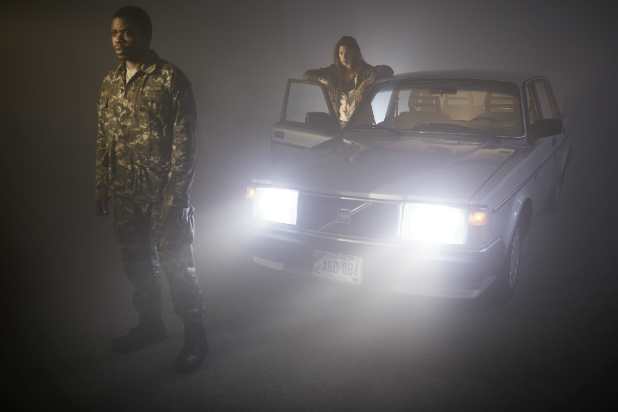 Spoiler alert and trigger warning: A couple minutes into the first episode of Spike TV’s “The Mist,” a dog dies.

The show opens on Bryan Hunt (Okezie Morro), a man in military gear who wakes up alone in a forest surrounded by the titular mist. The only thing in reach is a dog named Rufus and a wallet with his identification. He has no memory of who he is or how we got there and he has no idea what’s in the mist.

Or at least, he doesn’t until Rufus charges into the fog. Bryan hears the dog yelp and runs to the source of the sound, only to find it ripped apart, part of the dog hanging off a branch. Organs and blood are strewn about and he gasps before running away.

It’s incredibly brutal, especially considering the thin line that harming an animal in a film or show can straddle. In its review of the pilot, Indiewire argued that the move was “unnecessarily” brutal.

“One could perhaps argue that this was one of the few ways to convey the mist is merciless; uncaring in its mission to destroy, maim, or manipulate those caught inside. But as much is clear by the end of the episode, even without the dead dog,” critic Ben Travers wrote.

While many stories kill animals to prove a point about a violent atmosphere — “Game of Thrones” and “The Leftovers” are two recent examples — they don’t go so far as to show the gore.

People tend to be sensitive around the issue of dead or mutilated animals. The website MoviesWhere.com compiles multiple databases on deaths and uncomfortable scenarios that can happen in media. There’s a directory that can tell you if a kid dies and of course, if an animal dies. One of its most well-known subsections is “Does the Dog Die?” where you can check if what you’re about to watch includes a) an animal and b) if that animal dies.

Showrunner Christian Torpe, in a phone interview with TheWrap, noted that his intention wasn’t just to create a scene for shock value. Rather, the logistics of the setup required a non-speaking character.

“For the opening sequence, we have a guy waking up who doesn’t know who he is and he has his only friend in life, and I wanted to take that away from him, to start the story off by pushing him as much as possible,” he explained. “Now that would’ve been a human friend, but then I would run into the problems of someone who knew who he was so I gave him an animal friend instead and decided to start the story off that way.”

Bryan eventually wanders into a small town that eventually becomes surrounded by the mist. He tries to explain to law enforcement how dangerous it is, but they don’t believe him until they see it for themselves. Other people get torn apart by whatever’s in the mist. A woman loses her jaw, while another loses part of their face. It’s a violent show throughout, with or without the addition of a mutilated dog.

How it’ll be taken will depend on the audience. Some like Torpe might find it necessary as a way to keep the mystery surrounding Bryan in check but to also succinctly explain the danger around him. Others might find it gratuitous.

Either way, there’s a dog that dies in the first few minutes of “The Mist.” Watch out.